Skip to content
You are here:Home-Politics-Buhari Never Promised Not To Receive Treatment Abroad —Femi Adesina

Femi Adesina,the spokesman of President Muhammadu Buhari, has said that the president never promised at any point in time not to receive medical treatment abroad.

In a statement issued yesterday, Adesina said the comments are false and are “a new dimension in the plot to diminish the stature of President Muhammadu Buhari before millions of Nigerians who love and adore him as the executive president of Nigeria.

Adesina said it was morbid minds and dubious people who created the falshoold statement against the president to demarket and demean him.

He said this in reaction to a statement in circulation quoting Buhari as making the promise while speaking as a presidential candidate at Chatham House, London.

Buhari was alleged to have asked: “What is the difference between me and those who elected us to represent them, absolutely nothing. Why should Nigerian president not fly with other Nigerian public? Why do I need to embark on a foreign trip as a president with a huge crowd with public funds? Why do I need to go for a medical trip abroad if we cannot make our hospital (sic) functional?” 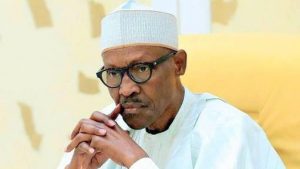 “First, it was a pernicious twisting and misinterpretation of the words of the president by mischievous elements, perhaps they can earn him opprobrium and infamy When they see that the gambit is not achieving the desired results, they have now gone into utter fabrication of apocryphal statements, which they purvey through the social media,” he said.

“Fortunately, the Chatham House lecture of 2015 is in the public domain. The concoction by haters and agents of disunity is not part of the text of the lecture at all.

“The morbid minds that created the falsehood simply want to de-market and demean the president, having seen that defeating him in a free and fair electoral contest is a tall order.

“Therefore, they desire to instigate the electorate against him by creating statements that never existed, and attributing such to him.”

The presidential spokesman, however, added that the “dubious” people will not succeed, as Buhari’s reputation “has been built over time, and sustained for decades.”

“That is why he is widely acclaimed for integrity, transparency, honour, and accountability, both home and abroad. Negative minds can never erode or corrode this,” he said.