Skip to content
You are here:Home|News|You Deserve No Apologies, IGP Tells Senate

The Inspector General of Police, Mr. Idris Ibrahim has described the Senate resolution against him as “a deliberate blackmail, witch-hunting with mischievous motives to hand-twist him to pervert the end of justice” in a felonious and serious offenses of criminal conspiracy and unlawful possession of prohibited firearms for which Senator Dino Melaye was standing trial.

The IGP said the Senate of the Federal Republic of Nigeria deserve no apologies from him following his non appearance before the hallow chambers because he (IGP) did not have to appear before the lawmakers, noting that a senior police officer of the rank of Deputy Inspector-General or an Assistant Inspector-General could act on his behalf in an official capacity at any function.

The IGP said he acted in consonance with Sections 7(1),312(1), 313(2) of the Police Act, a statement made available to newsmen yesterday in Abuja by the force spokesman, Jimoh Moshood stated. 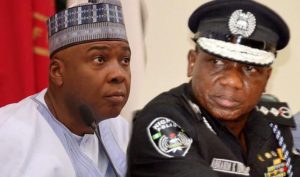