The governor of Imo State and the  chairman of the All Progressives Congress Governor’s Forum, governor Rochas Okorocha, has said his party has derailed and now practises the kind of politics of the People’s Democratic Party (PDP).

Gov. Okoracha, who was in Edo State to support the declaration of former governor of Edo State, Mr. Adam Oshiomole who declared his intention yesterday to run for the office of national chairman of the party, APC, lamented that APC is now playing the politics of PDP which is not too good for the party.

“Another thing I think Oshiomole will address is that our party has begun to play the same kind of politics like PDP. All of a sudden we have started derailing and playing the PDP kind of politics. This started by some of those people who found themselves in political office especially appointment, who did not win their booths and wards.”, he said.

He said Mr Oshiomhole should also address the weakness of the party in the South-South and South-East if he is elected as the national chairman of the party.

“Today, our party is going through some challenges and I must commend those who helped fight for this party even before this time, they have done well but the fight ahead, the challenges ahead are greater and we need great men like Adams Oshiomohle to do this job. For me particularly, Adams will strengthen APC in South-south and South-east”

“Suffice to say that as I speak to you today, I am the only governor from the entire South-east who is APC just like my brother, Obaseki is the only governor from the South-South from the APC. What this goes to say is that APC has challenges in the South-South and South-East for reasons not too far-fetched. For some myopic considerations and assessment, this party is not strong in those parts of Nigeria”, Okorocha stated. 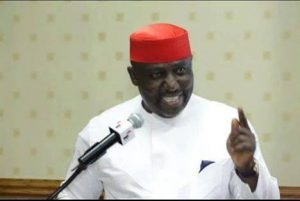