Skip to content
You are here:Home-Politics-Tinubu Threatens To Leave APC Over Ward Congresses

The national leader of the All Progressives Congress (APC), Asiwaju Bola Ahmed Tinubu, has threatened to leave the party over the crisis of ward Congresses in South West especially in Oyo and Ekiti States.

Some leaders of the party at the national headquarters hinted our correspondent that Tinubu visited Abuja earlier in the week to register his displeasure over the crisis of ward congresses brewing across the state, which affected his interests and were allegedly targeted to kill his political relevance in APC.

Tinubu was said to have sent a clear message to President Muhammadu Buhari and the leadership of the party at Abuja that he would leave the party if some cabal did not stop at deliberately killing internal democracy in order to destroy his political relevance.

Investigation revealed that Tinubu felt that he will lose the grip of the South West if Oyo and Ekiti States are taken from him through fraudulent ward Congresses.

Attempt to get the comment of the National Publicity Secretary of the party prove abortive as his phone could not be reached as at the time of writing this report. 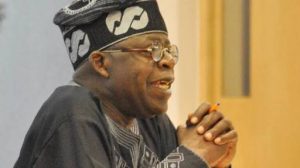