Skip to content
You are here:Home|News|Again, FG Re-arraign Sambo Dasuki After Granted Bail

The Federal government has again re-arraigned Colonel Sambo Dasuki on Thursday at the High Court of the Federal Capital Territory in Abuja after he was granted bail yesterday by the same court.

The Federal government based the re-arraignment on a 25 count amended charges against Dasuki, the former National Security Adviser to former President Good luck Jonathan.

The re-arraignment is the second of its kind in 24 hours.

Meanwhile the former Director of Finance and Supply at the office of the  NSA under Dasuki, Mr Salisu Shuaib, was, however, dropped from the list of the accused persons.

Counsel to the Federal Government, Mr Rotimi Jacobs said Salisu will however testify as witness in the case instead of being a co-accused. 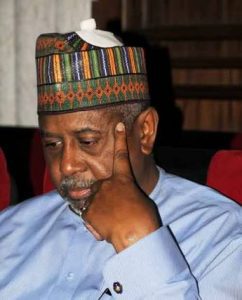