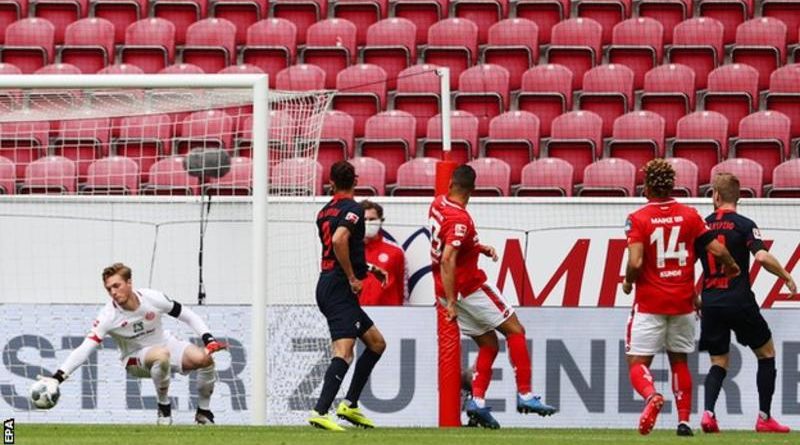 The 24-year-old Germany striker took his tally for the season to 30 with a superb hat-trick as his side won 5-0 to move third in the table.

Elsewhere on Sunday, pressure is mounting on Schalke boss David Wagner after his side lost 3-0 to Augsburg.

Schalke are now winless in nine games, and have scored only twice in that run.

And struggling Fortuna Dusseldorf were denied a vital win as Cologne came back from 2-0 down with three minutes left to draw 2-2.

Uwe Rosler’s Fortuna side have still only lost one of their past eight games, but remain third bottom in the relegation play-off place, three points adrift of safety.

Werner scored three goals and made three assists when Leipzig beat Mainz 8-0 in November to record their biggest ever Bundesliga win, and they again found him in devastating form.

He had come into the game, played behind closed doors, in the middle of something of a drought by his standards, after a run of only one goal in his previous eight league games.

But it took Werner only 11 minutes to find the target, breaking the deadlock with a cool near-post finish from Konrad Laimer’s low cross.

Yussuf Poulsen and Marcel Sabitzer added further goals against a hapless Mainz side before Werner made it 4-0 from close range, and he completed his hat-trick with an expertly-taken lob late on.

While Leipzig’s win means they are back in the Champions League places, Schalke’s slide down the table continued after an error-strewn display.

When they resumed their season after the winter break with a 2-0 win over Borussia Monchengladbach on 17 January, the Royal Blues were fourth, four points off the top of the table.