Skip to content
You are here:Home|News|Photo: Fela New Afrika Shrine Agog As French President Enjoy Self

There was a night of fun yesterday as French President, Emmanuel Macron, visited the new Afrika Shrine of late Fela Kuti in Lagos. 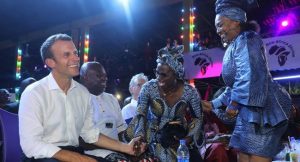 Starnews gathered that Macron had lot of fun at the Afrika Shrine yesterday with Femi Kuti, Angelique Kidjo,  governor Ambode, and with other notable Nigerians at the shrine.

Macron (who swiftly dispensed with his suit and rolled up his sleeves upon arrival), with Lagos State Governor and many others were thrilled by the iconic Femi Kuti with other African music heavyweights such as Angelique Kidjo and Youssou N’dour. 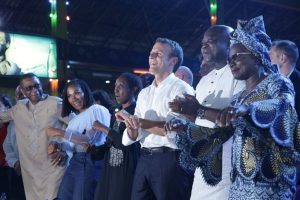 The French President is still in Lagos  spending some time at the legendary Afrika Shrine.