Skip to content
You are here:Home-Politics-Human Crowd In Ekiti As Okada Riders Hold Rally In Support PDP Candidate

The Motorcyclist Association In Ekiti State, popularly known as Okada Riders, today held a solidarity rally in support of the People Democratic Party (PDP) gubernatorial candidate, prof. Kolapo Eleka for the coming July 14,2018 governorship election coming up in the state.

The newly constructed bridge in Ado Ekiti , the Ekiti State capital was barricaded with crowd of supporters leaving little or no room for movement with as under the bridgeb was also crowded by the Okada riders with other supporters. 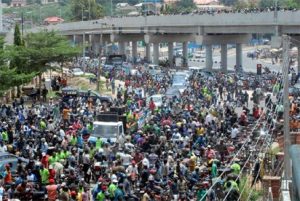 Meanwhile the Peoples Democratic Party (PDP) has vowed that the people of Ekiti State would resist any attempt to rig the July 14, 2018 governorship election in Ekiti State.

In a statement signed by its spokesman, Kola Ologbondiyan, the PDP accused the All Progressives Congress (APC) of deliberate plot to work in sync with the Independent National Electoral Commission (INEC) to compromise the elections.

“Let it be known to all that the PDP is fully mobilized for the July 14 election. The people of Ekiti state are fully rallied to vigilance at every polling unit, every collation centre as well as every exit and entry points in their respective areas across the state to ensure that nobody subverts their collective will.

“The people of Ekiti state are already aware of the clandestine meetings between known INEC officials and APC agents, including those held at the Ondo state Government House, Akure, where plots were hatched to use INEC’s Information and Communication Technology, (ICT) department to preload card readers and input false results, as well as cloning unclaimed Permanent Voter Cards (PVC) to superimpose pictures of their members from other states.

“The PDP cautions these compromised INEC officers, their allies in the APC and those they planned to import from other states, to note that their tracks and footprints are all bare and that the people of Ekiti state are already at alert and ready to stop them on their trails with every potency available to them under the law.

“What the APC and their cohorts in INEC fail to note is that Ekiti is a contiguous state where every indigene and residents know and can identify one another other as individuals and families and that as such there is no way in which strangers imported from other states can be allowed to sneak in and participate in their election,” the statement read in part.