Former Commissioner for Transport in Ondo State and Peoples Democratic Party (PDP) Senatorial Candidate in Ondo South for 2019 election, Otunba Nicholas Tofowomo, has released his profile for the attention of the general public as election draws nearer.

In a release made available to Starnews in Akure, the Ondo State Capital, by his Director of Media and Publicity, Akinrinlola Olumide, Tofowomo said the release of his profile to the public is necessary so as for his immediate constituents to have more background information about him as he seeks the support of the people in 2019 general election.

Read below the Profile of Tofowomo as delivered to Starnews:

Former Commissioner for Transport, Ondo State and a Yoruba Nationalist, was born on the 4th March 1960 to the late Sir (The Hon.) Justice Samuel Akinnebi Tofowomo and Chief (Lady) C.A Tofowomo 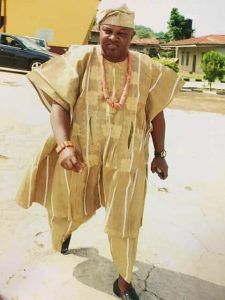 Political Career Milestone: Under the guidance and leadership of Governor Olusegun Mimiko, Otunba Tofowomo recorded the following achievements:
Managed Free school bus shuttle, first of its kind in Africa; Established traffic management unit (ODTMU); A rare privilege of being the longest serving Commissioner from Ile-Oluji kingdom; First commissioner to generate revenue for Ministry of Transport; Coordinated the integration of Okada and tricycle operators under one unit as commercial motor cycle and tricycle association (COMTRA);