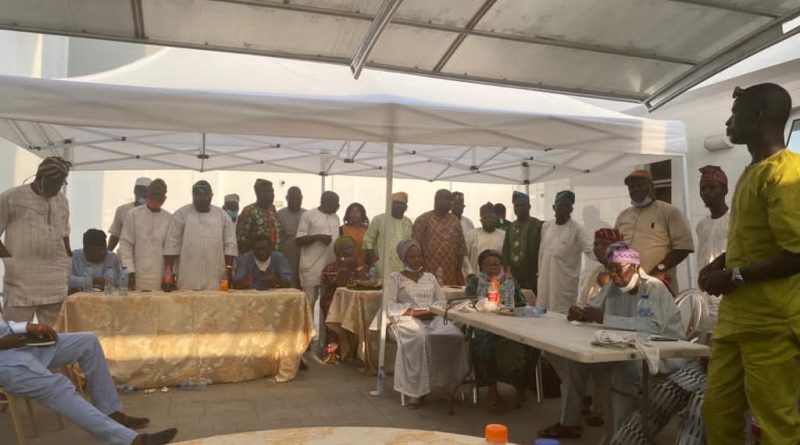 The entire leadership of the People’s Democratic Party (PDP) in Ogun State has pledged loyalty to the leadership of the former governor of Ekiti State, Ayodele Fayose, declaring that they would only attend meetings called by Fayose on the issues regarding the PDP in the Southwest zone

Starnews Nigeria reports that this was made known on Monday when Hon. Ladi Adebutu and Ogun State Chairman of the PDP, Dr Sikirulai Ogundele led all the 14 members of the State Working Committee, all the 20 Local Govt Party Chairmen and all National Delegates to visit Fayose, in Lagos.

They prayed for the former governor and urged him to remain focussed and undaunted in his quest to ensure fairness, equity and justice in building a formidable PDP in the Southwest Zone, and Nigeria in general.

Dr Sikirulai Ogundele, who spoke on behalf of the delegation said; “Today we visit our leader, the key leader that we know in the Southwest, Dr Peter Ayodele Fayose, to wish him a Happy Birthday and to show our solidarity with his leadership and unalloyed loyalty and commitment to his directives in the zone in the coming South-West zonal congress and that Ogun State will not be a part of any meeting that is not initiated by him.

“We condemn all acts of violence by some leaders who are claiming to be generals, but without followership and we call on the National Working Committee to call them to order as no group or individuals has the monopoly of violence.

“We equally acknowledge and appreciate the National Working Committee (NWC) led by Prince Uche secondus and we pledge our loyalty to the NWC while we call for a credible southwest congress.

“We again emphasize that every state is independent and there is no Governor-General in the constitution of our party.

“For the coming South-West Zonal Congress, we stand by Dr Eddy Olafeso as the Zonal Chairman.”