Groups of youth on Thursday stormed the Ministry of Power, Works and Housing in Maitama, Abuja to protest against the renewal of the Benin Electricity Distribution Company operational licence.

Electricity consumers in Ondo Coordinated by Bring Back Our Light (BBOL)

According to Primium Times, the protest was organised by the BEDC Franchise States Peoples’ Alliance and had protesters, comprising smaller groups from Edo, Delta, Ondo and Ekiti States. 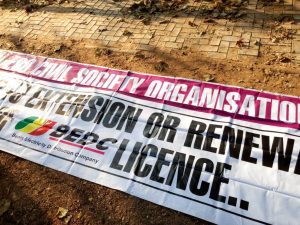 The groups urged the ministry to avoid being compromised and demanded for the non-extension of the licence of Vigeo Holdings Limited, the firm in charge. 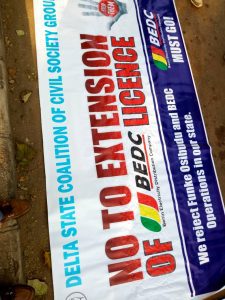 Leading Leaders of the protesting groups from Edo and Ondo said the DISCO has not added any value to what it met, adding that the region has been groaning under heavy estimated bills with deliberate non-supply of meters. 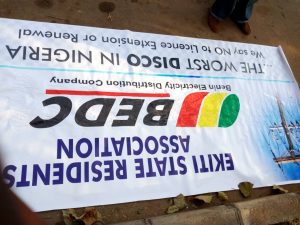 The groups also said the BEDC has refused to provide transformers and electrical poles including ancillaries.

”Since the takeover, the BEDC has not demonstrated any discernable improvement or added value to what they on the ground.

Nigerians have been groaning under heavy estimated bills, a deliberate non-supply of meters, molestation of customers with military personnel, refusal to connect communities to the national grid, non-provision of transformers, poles and other ancillaries,” a spokesman of the group, Leftist Agho said.

Watch the video via this links

The group described the Bureau of Public Procurement (BPP) reported one-year extension of the company’s licence as unacceptable.

”It is our humble submission that the five-year probation period is sufficient for the review of the performance of the DISCO to determine renewal of operating licences or otherwise.

”It is clear to all and sundry that the operators of the BEDC have failed in all fronts since takeover. A review of reports and surveys from the four states’ houses of assembly, civil society groups, extracts from town hall meetings, petitions, protests by communities have revealed that the BEDC has not delivered in accordance with the performance agreement entered in November 2013.

”Hence they do not deserve an extension or renewal of operational licence. The people are fed up with the unfair business operations of the management of the BEDC and can no longer take it.”

The groups also asked the minister to act by sacking Funke Osibudu, the BEDC helmsman.

”We are all here to protest the sudden silence of the ministry over the expiration of the BEDC licence, and we are demanding that the licence must never be renewed and extended. We want the company sacked and gone and we want BPP or NERC to take over the operations,” the spokesman said.

”We are here to see the minister of power, works and housing, Babatunde Fashola, so he must let the president know that the people who are on the receiving end are saying enough of Funke Osibudu and BDEC. We want them gone.”

Two protest arrow-heads, Terry Ajagbawa and Dare Omopariola, who spoke on behalf of the Bring Back Our Light in Ondo state and Edo Civil Society Organisation, also urged the government to look for an urgent replacement for the company (BEDC) since it had failed.

Starnews gathered that the protest started yesterday and will last till tomorrow with plans to take the protest to relevant Ministry, Department and Agency (MDAs) on electricity in Nigeria.

Our correspondent gathered that more than 50 allegations were raised against BEDC to expose the level of their  incompetence and inefficinecy in covering the Four States under their coverage.