Skip to content
You are here:Home-News-Edo Resident Allegedly Electrocuted By Fallen Live Cable of BEDC

There is serious commotion in Eyaen Primary School in Benin City under Ikpoba-Okha local government area of Edo State over the electrocution of yet to be identified man by alleged naked live wire that fell from the electricity poles of the Benin Electricity Distribution Company (BEDC). 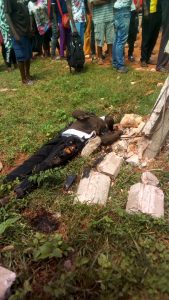 Starnews gathered that pupils of Eyaen Primary School in Benin City have gone on rampage over the situation which has posed serious traffic challenges to the areas.

The incident has been confirmed by
Mr Osazee Edigin, the Public Relations Officer of Edo Civil Society Organisations.

Edigin while speaking to our correspondent alleged that the live naked wire have been down for over 48 hours.

He described BEDC as an organistion that lacks maintenance culture.

A call put across to the business manager of BEDC in the local government area by our correspondent was not answered.

Meanwhile, the case has been reported to the nearby police station by residents of the area as at the time of filing this report.

Starnews also gathered that there is ongoing protest in the areas as at the time of reporting this sad incident.

This is happening at a time coalition of civil societies, non governmental organisations in the coverage areas of BEDC, are currently planning a mega protests in Abuja to call on the Federal government not to renew the operating license of BEDC in September following many allegations listed against the discos company.