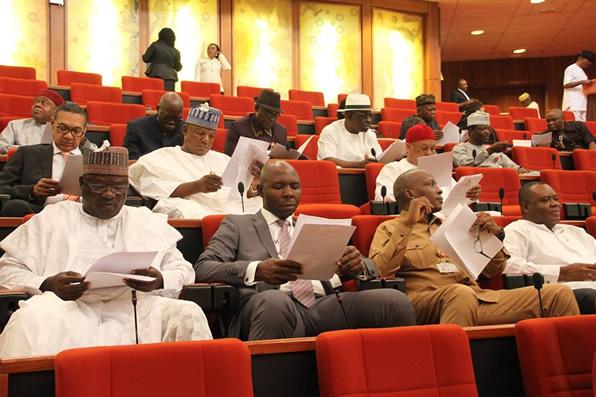 There are strong indications that the All Progressives Congress senators and their Peoples Democratic Party counterparts are heading for a showdown as the National Assembly reconvenes on Tuesday.

Saturday PUNCH reliably gathered on Friday that the bone of contention bordered on what should be discussed at the plenary on Tuesday.

It was learnt that senators, who are loyal to the Senate President, Dr. Bukola Saraki, were insisting that the only agenda would be the consideration of President Muhammadu Buhari’s budget for the 2019 elections.

The anti-Saraki lawmakers on the other hand, said nothing was sacrosanct, adding that they could raise the issue of the leadership of the senate.

Following the defection of the Senate President and 13 other senators from the APC to the PDP, the ruling party had called on Saraki to resign.

But the Senate President on Wednesday said he would resign only if two-thirds of  senators passed a vote of no confidence in him.

A pro-Saraki senator, who confided in Saturday PUNCH, said, “On Tuesday our focus will be INEC budget. Those who think we will debate majority and leadership issues are wasting their time.”

But another senator, who is opposed to Saraki, said, “No issue is sacrosanct. Saraki’s issue will come up on Tuesday.”

Senator Ovie Omo-Agege, who is a member of the Parliamentary Support Group, a group of President Muhammadu Buhari’s loyalists in the National Assembly, said the APC senators would use every opportunity to seek Saraki’s exit from the senate presidency.

According to him, there are legal and moral reasons for Saraki to quit the Senate presidency.

Omo-Agege, in an interview with one of our correspondents,  said, “The moment Saraki defected from the APC to the minority party, PDP, he no longer has the moral, political and legal rights to remain as the Senate President. We have requested of him to step down. We have requested of him to do the honourable thing, to do the needful by stepping down. It is a request we are going to continue to make and any opportunity we have, we are going to insist that he must step down.”

He recalled that the Senate President had at the press conference on Wednesday said he was ready to leave the seat once the constitutional requirement was met.

Ibrahim, in an interview with one of correspondents,  said, “Let them come to the chamber when we open and let them come and carry out the impeachment. All they need for the impeachment is about 74. If they can get the signatures of 74 members and they will be there; if they can stand up for division and we can see them, then they will have their way. That is the beauty of democracy.”

APC has lost its majority—Olujimi

In her submission, the Deputy Minority Whip, Senator Biodun Olujimi, argued that the APC had lost its majority status in the chamber, noting that the PDP had the same number with the ruling party.

The Senate principal officer dismissed the calls by the APC, its National Chairman, Adams Oshiomhole and Prof. Itse Sagay for Saraki’s resignation on moral grounds.

She recalled that PDP senators voted more for Saraki to become the Senate President than the APC.

Olujimi said, “I don’t understand what they are saying because they need two-thirds majority to remove him. They should bring the numbers, that is all. They don’t need to talk on the pages of newspapers. They don’t even have a simple majority right now, we are equal.”

Asked to explain the configuration of senators and their parties in the Senate, the lawmaker said, “There are two in ADC, two in APGA, two are dead and one is incarcerated (jailed Senator Joshua Dariye). That is seven. Take that from the total 109, you will get 102. Each of the PDP and the APC has 51 members.”

Speaking on the call for Saraki’s resignation on moral grounds, Olujimi said, “What is morality in 51-51. He is sitting atop same number as theirs. It is a different case if they have 70 or at least 65, then their majority will be clear.

“Again, how many of them were party to our electing the Senate President? Just a handful of them. It was majorly by PDP senators. Out of the 53 votes he got, we gave him 42 of them. So, what are they talking about? Fifty-three senators put him there, though we were not complete then but we gave him 42 votes. They should be rational.”

All issues will be sorted out after annual recess- Saraki

When contacted,  Saraki,  who spoke through his Special Adviser on Media, Yusuph Olaniyonu,  said issues arising from defections, which should be dealt with at plenary,  would be sorted out when the Senate resumes fully from its eight-week annual  recess. Olaniyonu, stated this in a telephone interview with Saturday PUNCH, in Abuja while responding to a question on whether the Senate President would declare the seat of the former Senate Minority Leader, Godswill Akpabio vacant.

Akpabio defected from the PDP to the APC on Wednesday.  He said, “As far as we are concerned, we are on recess now. When the Senate reconvenes, every issue will be sorted out at plenary.”

Meanwhile, the PDP has asked President Muhammadu  Buhari and the APC to stop deluding themselves and come to terms with the reality that they lack the legislative number and constitutional facilities to impeach  Saraki and the Deputy Senate President, Ike Ekweremadu, or to call for their resignation.

The PDP said the Buhari Presidency and APC, having allegedly realised that there was no way they could muster the constitutionally required two-thirds of the votes of the 109 senators (representing 73 senators), were  engaging  in underhand tactics, including the invasion of the National Assembly, which it said turned out as a disgraceful adventure.

The National Publicity Secretary of the party, Mr. Kola Ologbondiyan, who stated this in a statement in Abuja on Friday, also asked Prof. Itsay Sagay and others clamouring for Saraki’s removal, to wake up from their slumber.

He said, “Now that they have discovered that there is no way they can achieve their evil intentions, they have commenced a war of blackmail, distortions of fact and media trial against the Senate leadership, which, of course, will end up as another wasteful venture as Nigerians are aware of the long-drawn desperation of the Buhari Presidency to annex the legislature.”

Ologbondiyan added that majority of members of the APC in both chambers were with their presiding officers.

He added, “Even among the ranks of the depleted APC senators and members of the House of Representatives, there is a huge aversion to the underhand tactics being deployed by the Buhari Presidency and the APC to force out duly elected presiding officers of the National Assembly.

“As such, such lawmakers are fully aligned with Nigerians, the PDP and the National Assembly leadership in the protection of the independence, sanctity and integrity of our parliament and all democratic institutions in our land.

“It is therefore instructive for both the Buhari Presidency and the APC to know that there is no way they can remove the leadership of the National Assembly, particularly the Senate.

“We also ask Prof. Tsagay and others like him to bury their thought of the illegal removal of Saraki and his deputy.”

Ologbondiyan cautioned the Buhari Presidency and the APC to stop overheating the polity with their outbursts and shed future “perverse attempts to circumvent our rules and constitution, as such will not help them or change the resolve of Nigerians to vote them out in 2019.”

209 thoughts on “Battles Thicken Between APC, PDP Senators To Control Leadership of Assembly As Nass Reconvens On Tuesday”