Skip to content
You are here:Home|News|Voters Scamper For Safety As Thugs Hijacked Rerun Election In Osun

—Observers, Journalists are being arrested, and prevented from operating

–We are experiencing coup and not election, Senator Adeleke lamented

Voters were forced to flee some polling units in Osogbo, Kajola village, as gunshots rented the air at Ile Ife North with Nigerian Police accused of arresting journalists and observers at Ife-North local government while some thugs restricted electorates from voting at ward 1 and 4. 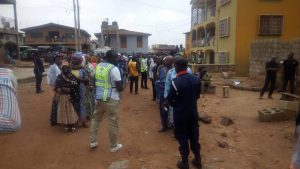 Meanwhile INEC said it is being disturbed about reports that accredited media and observers are being arrested or prevented from operating in some polling units. But however said the case is being taken up with the security agencies,” through a tweet.

Meanwhile the Governorship candidate of the Peoples Democratic Party in Osun State, SenatorAdemola Adeleke, has described the ongoing rerun election in seven units in the state as a ‘coup.

Adeleke, who spoke with Punch Newspaper on the telephone, said that supporters of the PDP were being denied access to ballot papers in the governorship rerun election.

“What is happening in Osun State now is not an election.  What we have is a coup.  That is what we are witnessing now.

“Our supporters are being harassed and are not allowed to vote at all. Let the whole world know that this is not the democracy, ” he said.