Skip to content
You are here:Home-Politics-Updated Report of Ongoing Election In Ekiti State #Ekiti Decides#

— Massive Turn Out As Accreditation and voting begin in several LGAs

Despite the heavy presence of police in Ekiti State which generated fear that voters may likely be intimidated, Starnews gathered the electorate came out massively in their numbers.

Accreditation is presently going on in some local governments while voting proper is ongoing in most LGA’s in Ekiti State. 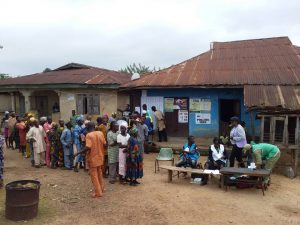 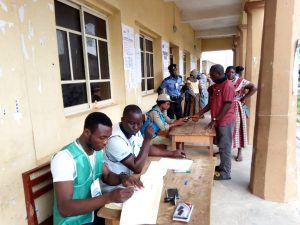 Updated report of the election as at the  time of filing this report :

PDP supporter are allegedly not allowed to cast Their votes and those who vote for APC are given 5,000

Party Agents misunderstanding.
One Party agent pours acid on the other.

L.G.A: Oye
Ward: 6
P:U: 4
Time: 8:16am
inecnigeria staff present
Security personnel present.
Voting has commenced
Some voters who did not register in the area are trying to vote, security personnel trying to resolve it
EkitiDecides

There is a massive turnout of voters in Ikere Ekiti, Eleka’s hometown.

L.G.A: Oye
Ward: 6
P:U: 9
Time: 8:34am
Students of Fed. University of Oye Ekiti who are not indigenes of Ekiti State are trying to vote, traditional ruler is trying to settle the issue.
A fight has broken out
Security personnel not interfering.

9:12am At Ijero ward A PU 004 accreditation / voting ongoing. The PO confirms that the card reader is working perfectly, and there is no record of any violence since they started the process.