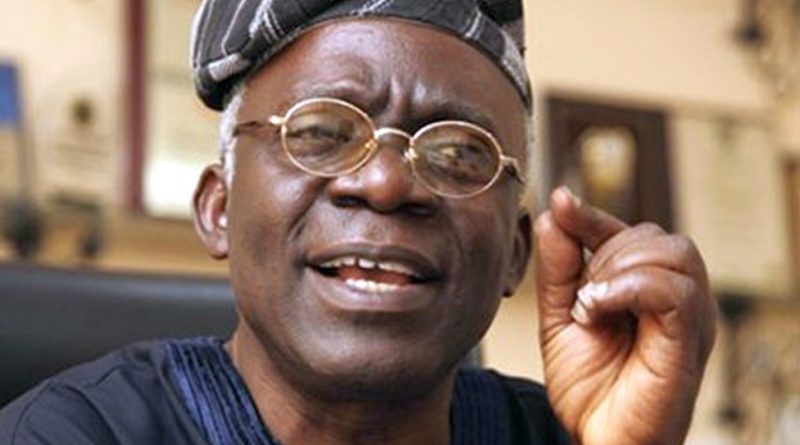 Mr Femi Falana (SAN) has asked the Federal Government to declare how much stolen funds it has recovered since 1999.

The first woman Senior Advocate of Nigeria (SAN), Chief Folake Solanke, shared Falana’s position on Thursday when they spoke at the 20th Mike Okonkwo Annual Lecture during the celebration of the 74th birthday of the Presiding Bishop of The Redeemed Evangelical Mission (TREM), Bishop Mike Okonkwo at the MUSON Centre, Lagos

Solanke was the chairman of the occasion while Falana was the guest speaker.

Delivering the lecture, titled: The Danger of Unequal Criminal Justice System in Nigeria, Falana said the Federal Government, through the Economic and Financial Crimes Commission (EFCC), had recovered over N1 trillion from looters through its whistle-blower policy since 1999.

But the popular lawyer said the exact amount had not been declared, neither had the government said what the funds were used for – though he also mentioned that N605 billion was recently recovered.

Falana said the government should use the funds to empower local government areas to provide jobs at the grassroots to check unemployment and curb crime.

He said: “The Federal Government has recovered huge sums of money from looters. One of the policies of government, the whistle-blowing policy, has fetched the country N605 billion as of three months ago. I am, therefore, suggesting that the billions recovered by the EFCC, let the Federal Government allocate at least N1 billion to every local government area for job creation for our young men and women.”

On the nation’s justice system, Falana regretted that despite the constitutional stipulation of equality before the law, it has been difficult for the poor to get justice.

The popular lawyer said majority of Nigerians have no access to lawyers, while the rich are able to subvert justice by paying huge sums of money to stretch trials, get police and military connivance or buy favourable treatment when incarcerated.

“What we have done is to create agencies, like the Legal Aid Council, the National Human Rights Council (NHRC) and individual lawyers to encourage them to ensure that the poor get justice.

“Because if the poor do not get justice, whether the government likes it or not, whether you arrest al the Sowores of this world, there will be a revolution one day. Because when the poor rise, it can be dangerous in any society. It can even lead to anarchy, as it is the case now.

“Wednesday, what happened in Lagos – the attacks – if you watched the film on television, you will know that we are in trouble. Some of the criminal elements openly carried the loot on their heads and the police had a hard time containing the crisis. That is why we must go out and ensure that injustice in the polity is addressed.”

Falana accused the military and police of aiding crime in Nigeria by conniving with criminals and politicians.

The activist lawyer gave example of notorious kidnapper Evans, who allegedly used a Lance Corporal to pass through checkpoints without being checked while his victims were in the boot.

He also alluded to the current case of Taraba State-based kidnapper, Alhaji Hamisu Bala (aka Wadume) in which the suspect exchanged calls with a Divisonal Police Officer (DPO) and an Army captain.

He said the arrested soldiers in the Wadume case should be tried by the Attorney General of Taraba State, and not the military.

The activist lawyer described the court martial as a cover-up.

Falana said: “Every crime in Nigeria has to be tried in the venue of the crime. So, if the people are killed in Jalingo, Taraba State, you cannot try them in Jos, Plateau State. That means you want them to escape justice.

“So, we are asking the authorities, particularly the Attorney General of Taraba State, to take over the case without further ado so that justice can be served without further delay.”

The Armed Forces Act provides for internal disciplinary mechanism, known as Court Martial, whereby serving personnel are tried and if found culpable, dismissed and handed over to the police for further action.

To address the problem of illegal detention, Falana urged Okonkwo and members of TREM to ensure that the poor get justice.

The popular lawyer suggested that the church could join the magistrates to inspect police stations monthly and identify people languishing in illegal detention.

He promised to collaborate with the church to make this happen.

“By next year, this church will be rolling out how many people have been freed form illegal detention. I know your church has a number of lawyers and I will be prepared to partner with them to ensure justice is done and served,” he said.