Senatorial Candidate of the opposition People’s Democratic Party (PDP) in Ondo South, Otunba Nicholas Tofowomo, has called on the good people of Arogbo community in Ondo State to reject the ruling APC which he described as “the Association of Poverty Creators” ahead of the forthcoming general election. 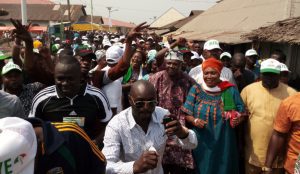 Tofowomo made this call yesterday at a political rally organised by the PDP in Arogbo, Ondo-State.

He described the APC as a party of “non achievement, saying that, they represent backwardness, poverty, stagnation, and herdsmen.

He promised to work towards the actualisation of Agadagba -Arogbo bridge.

Tofowomo also promised to move a motion for the review of payment to beneficiaries of amnesty scholarship programme who were dropping out of schools due to lack of fund and deliberate fustration of the programme by the administration of President Muhammadu Buhari.

“The only amnesty programme that took place effectively in Nigeria was the one led by your son, Kingsley Kuku under the PDP administration of President Goodluck Jonathan.

“Ever since Kingsley Kuku and Jonathan’s administration ended, Buhari has frustrated the amnesty programme.

“He deliberately refused to fund the programme with many students dropping our of school.

“We will move a motion for the review of this programme to save the future of your children. We will heal your wound  if you cast your votes for me and all the candidates of PDP in this coming election.

“Reject the Association of Poverty Creators called APC. Reject the political party being controlled by herdsmen. Your sufferings will be over if you vote PDP and all its candidates.

“Recall that the only achievements in this community were done during the era of PDP. A vote for PDP is a vote for your son Kingsley Kuku.

“I promised you, I am not going to be a docile senator if elected. I will work towards actualisation of the construction of Agadagba- Arogbo bridge.

“APC has no achievements in Arogbo community. It’s quite obvious the only development I sighted was done by Kingsley Kuku and other PDP representatives you had in the past.

“Kolade Akinjo and I will never disappoint you”, Tofowomo added.