Skip to content
You are here:Home|Politics|Police Slap Me, Beat Me, Shot At Me, Fayose Weeps As He Cried Out

Police Slap Me, Beat Me, Shot At Me, Fayose Weeps As He Cried Out

While speaking to the press in Ekiti after the alleged attack on him by the police, governor Fayose was weeping, telling the people to hold the IGP of Police responsible if anything happens to him as he claimed he is under unusual pain and ache as a result of the incident.

The governor also called on the international community to beam their search light on the human right abuses and the assault on democracy in Ekiti State. 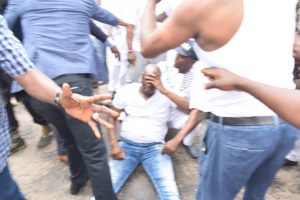 “I was slap by a police, beaten and shot by the corporal. The AIG instructed them to kill me. I am pained, ached, all my body is aching me. If anything happens to me, Ekiti people should hold the inspector general of Police responsible. Democracy is dead in Nigeria. This is done on the instructions of Buhari. Ekiti is under siege. There’s army occupation of our land, the governor weeps as he cried out. 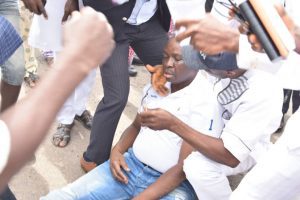 Meanwhile, the police has explained that they only dispersed an unlawful rally organized by the PDP.

The AIG in Ekiti State, Abdullahi, claimed that his men only fired teargas into the air when the governor attempted to reconvened the crowd after they have been dispersed his team.

While speaking to channels TV, Adbdullahi, said no group is given permission to stage any rally in Ekiti State at this odd hours to ensure laws and order are maintain for the benefit of everybody in Ekiti State.