Skip to content
You are here:Home-Politics-PDP Steps Up Grassroots Campaign, Visits More Villages In Ondo Communities

By Oyeniyi Iwakun
In its grassroots mobilization and sensitization towards wooing more votes for the party ahead of the 2019 general elections, the People’s Democratic Party (PDP) in Okitipupa Local Government of Ondo State, has visited more villages and farm settlements under the State  Constituency I of the Local Government.
The  campaign train driven by its motto, “Better Life”, had last weekend visited several villages like :  Agbetu/Abusoro, Idobilayo, loyinmi, Ilebe , Iwada,  Irowa, Ilutitun Oil Palm Estate, Oloto, Igbisin, Igedege, and Abusoro/ Egwen Lisa, were visited between January 22, 2019 to January 24, 2019. 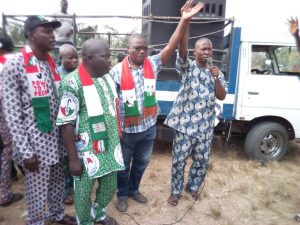 Hon Oye Ibine, Ondo State Secretary of PDP (right) wearing Ankara cloth while raising the hands of Ikengboju Gboluga, Candidate of PDP for House of Representatives for Okitipupa/Irele Federal Constituency. By the left hand is Hon Solomon Bitire, chairman PDP campaign committee For Okitipupa LGA, wearing PDP Ankara cloth at a rally in one of the villages

Leaders of the various settlements visited by the PDP bemoaned the high rate of insecurity in Ikale land even as they lamented the insensitivity of the ruling All Progressives Congress (APC) to the plight of the citizens.
While noting the obvious neglect of the people living in rural areas especially farm settlements and villages by the APC administration, the people of Iwada village  said such neglect has resulted into severe infrastructural decay that most school buildings within the area are now dilapidated. 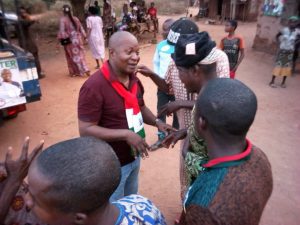 Candidate of the PDP for Ondo State House of Assembly in Okitipupa State Constituency I, Hon. Adelokiki Lawson, with PDP logo on his neck, addressing some youths

The community leaders complained of incessant threats to their lives by unknown persons that rob them of their valuables at will; an act they claimed wasn’t in existence under the PDP’s administration.
Lamenting the hardships posed by the recent clampdown on farmers by Ondo-State goverment and the management of Okitipupa Oil Palm Company (OOPC), via sponsored attacks and indiscriminate harrasments, they promised to deliver  98% votes or more for the PDP.
At Loyinmi Village, the residents said “We now live in fear. The security of lives and properties have been compromised. We can no longer go to farm with peace of mind. For instance, the Pumping Machine for that Solar Borehole constructed by the PDP government has been stolen. This wasn’t the case under the PDP. There is too much hunger in the land.” 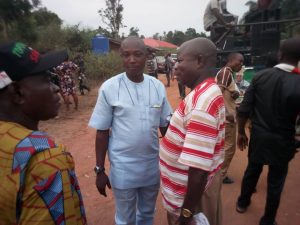 It was the same complain at Idobilayo Village and other Villages in the area. The visited communities also lamented the abysmal road networks and other infrastructures:  “our roads are terribly bad, thank God you saw it while coming  here. We cannot move our farm produce to the market with ease. I can’t recollect the last time our roads were graded. We have never had it so bad.”
“This is PDP zone and be rest assured that it will remain so. We are PDP and PDP is ” us”.” Idobilayo Village Head (Baale) responded while assuring the PDP leaders of their full support ahead of the general election. 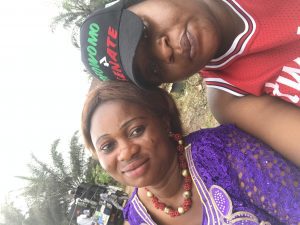 Bukola Abilawon In face cap with a PDP chieftain

Addressing the people, the leadership of PDP has vowed to dislodge the APC  at all levels of government in the forthcoming election even as they appealed to the people  to give in their best to the rescue mission.
The Campaign Committee led by its chairman, Hon. Solomon Bitire, felt very sorry and concerned for the pains and suffering of the people. He restored their hope and assured them of PDP’s readiness to ameliorate their problems if PDP wins in February general election.
Bitire said that PDP will not only meet the demands of the electorates in terms of development, protection of lives and properties, but will also run an inclusive government where there will be equity, fairness and justice.
“If you support us, your inheritance and entitlements will not be given to foreigners. Your farms will not be taken from you by herdsmen and your children will enjoy gainful employment after graduation, Bitire said” 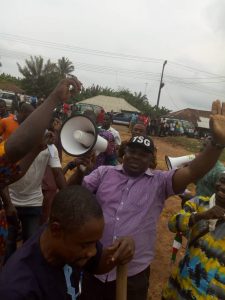 Otunba Nicholas Tofowomo, Senatorial Candidate of PDP for Ondo South in one of the Villages

In his address at Ilebe Village, the party’s House of Assembly Candidate for Constituency I, Hon. Lawson Atijosan Adelokiki expressed worry over the increasing moral decadence and the fall in academic standard and infrastructural deficiencies in schools.
The proprietor of Success Group of Schools and Optimum Victory College, Okitipupa, decried the rate at which facilities in public schools especially in remote communities are wasting away, promising that if elected as a Lawmaker to represent the constituency, he would advocate for the maximization of such facilities with a view to improving the standard of education in his constituency and Ondo state at large.
He said: “Education is my field and I have recorded major breakthrough over the years. It is one of the most sensitive aspects of our society that needs urgent revolution. I shall give education the priority it deserves because I am confident that any nation that gets it right with education will be highly productive. It is my resolve to pursue policies and programmes that will make Ikale land a productive nation. We shall make education what it ought to be if elected”
Speaking at Iwada Village, former Member of Ondo State House of Assembly from Okitipupa constituency I, Hon. Niyi Adebusoye pointed out many projects of the PDP government he personally supervised ranging from bore holes, water dams,  Roads, and many others as he implored the people towards winning the election for PDP -a task he said eveyone must undertakes.
The Party’s House of Representative Candidate, Hon. Gboluga Ikengboju encouraged  the people not to lose hope in the system as the PDP has presented credible candidates capable of wiping their tears.
Ikengboju who observed the rot in the health sector raised the people’s hope that there would be turnaround in the sector if elected to the green chamber of the National Assembly as their Legislator.
The renowned pharmacist said his professional skills and experience would be effectively utilized to ameliorate the challenges of his constituents if he is elected.
“For you to know how serious we are, a group of professional health personnel will storm this constituency by the end of this month, courtesy Pharmaceutical Society of Nigeria. The aim is to provide free health services to our people. So, whatever health challenges you may be having, just feel free to come to them when they are around and I am sure by God’s grace, it will be handled.
“We shall continue with similar programmes if elected, come February, 16th, 2019. So I plead with you to come out en-masse and vote for the PDP. Our people deserve the best” He said.
Similarly, the Ondo State secretary of the PDP, Chief Oye Ibine tasked the people to remain steadfast in their resolve to enthrone the PDP government again.
He noted that apart from being the largest party, the PDP is the best structured political party in Africa that understands governance and how to organize people.
He explained further that PDP respect people’s opinions, tolerate criticisms and opposition. “We understand the principle of fair and equitable distribution of resources. PDP has a brilliant zoning arrangement as a result of the heterogeneous nature of our country and we have been respecting that laid down arrangement.”
Chief Ibine urged  the people to be wary of dangers accruable to reelecting APC again. To him, any vote for the APC is a vote for hunger, corruption, insecurity, deceit and setback.
“Thank God you are all aware that the price of a bag of rice is no longer the same with what we had under PDP. What about petroleum, clothes, and food items?
“Our children  are now forced to indulge in criminal activities due to joblessness and hunger. They now hunt for female pants and diapers for  rituals just to survive at all cost. This is the height of it and we must agree that APC and Buhari have failed us. Many women are now widows, children orphans as a result of Boko Haram and Fulani Herdsmen killings. This has to stop, and the decision is yours” he said.
Recall that the Better Life Campaign of the PDP in Okitipupa Local Government kickstarted at  Adewenle, Ago Alafia, Ayetoro, Wakajaiye village and 49 on Saturday, January 20, 2019.