Skip to content
You are here:Home|Politics|Ondo 2019: Bitire Declares For Assembly

Declaring his intention at the party’s secretariat in Okitipupa town of Ondo State, Bitire sought the support of all the leaders of the party in his constituency towards the realisation of his ambition. 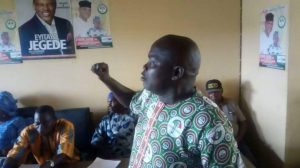 “Okitipupa constituency II needs a grass root politician who is very close to the people. We need a representative who resides with the downtrodden at home and can know where the shoe pinches. You will agree with me, I fit into this category. I am not a politician in abroad whose door is not open”, Bitire added.

Bitire also said that “it is over 27 years when last Erinje ward (his ward) has been given the opportunity by PDP to produce a candidate for the Ondo State house of assembly.”

Also at the meeting were the 6 ward chairmen in Okitipupa constituency II, some local government party executives within the constituency and over 40 women who are also leaders of the party in their various wards.

Members of “Driver Union” in Okitipupa local government were also in attendance to honour the aspirant.