Skip to content
You are here:Home-Opinion-Nicholas Tofowomo – The Incoming Senator With Distinguished Identity

By Olumide Akinrinlola
Everything about the People’s Democratic Party (PDP) Senatorial Candidate in Ondo South, Otunba Nicholas Tofowomo, is unique, excellent and uncommon.
Apart from the fact that he is the most educated, experienced, exposed, best performed in previous political office, among the Senatorial candidates we have today in Ondo South, ahead of the 2019 general election, Tofowomo is the only one among the four of them produced through electoral college which was adjuged as the most credible, popular, free and fair, in the history of party primary election in Ondo South since the return of democracy in 1999.
No wonder he stands where others have fallen. He is outstanding where others are standing; a standard where others have recorded outstanding. And he remains excellent to others who were marked as the standard, because he understands what good governance and true democracy is all about.
I wasn’t surprised when he won the opinion poll conducted on Facebook recently for the people of Ondo South by Surulere Akinbuwa with a wide margins when the people voted online for him as the person they wanted at the red chamber of the National Assembly as their senator.
It is because Ondo South knows that Otunba Nicholas Tofowomo of the PDP is the most prepared, competent, the best, and readily available for the job, a man who has rolled out his blueprint for Ondo south even before he won the primary election of his party, and of course, the only one who has a blueprint for Ondo South as a Senatorial Candidate even till now.
In spite of the obvious above, which without sentiment cannot be faulted by anyone, Tofowomo has a distinguished identity that makes him a brand – an identity that makes it easier even for a foreigner to identify him in the midst of multitudes. 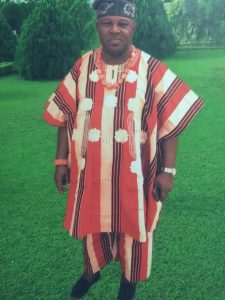 Otunba Nicholas Tofowomo In Dansiki Cloth, as at 1999.

The identity here is about the type of cloth he wears. Despite being a civilised personality who has travelled across the globe, Tofowomo is known for wearing the native attire popularly known as”Dansiki ” in Yoruba language.
This is an uncommon identity peculiar to Nicholas Tofowomo even in this 21st century. He has no native attire other than “Dansiki”. He is known with the choice of “Dansiki” whenever he is wearing native attire ever since he graduated from the University. 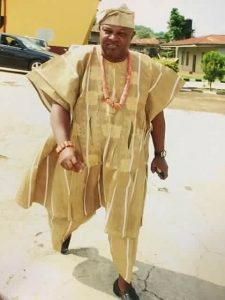 For those who don’t know “Dansiki”, you can simply identify one in the picture above. It’s an ancient style of native dress with big trouser with almost the size of three quarter, blended with ancient type of cloak (Agbada) with two pockets in the front as exhibited in the picture above by the Senatorial Candidate of PDP in Ondo South, Nicholas Tofowomo.
This type of dress is known with Tofowomo and has created an identity for his personality which distinguishes him anywhere he goes both home and abroad.
Tofowomo has already branded himself. He is already a symbol, a brand, a voice, and he is, automatically, a side attraction, if he wins the forthcoming February Senatorial election to represent Ondo South as member of the 9th senate of the Federal Republic of Nigeria.
Omumide Akinrinlola is the Director, Media and Publicity, Tofowomo Campaign Organisation