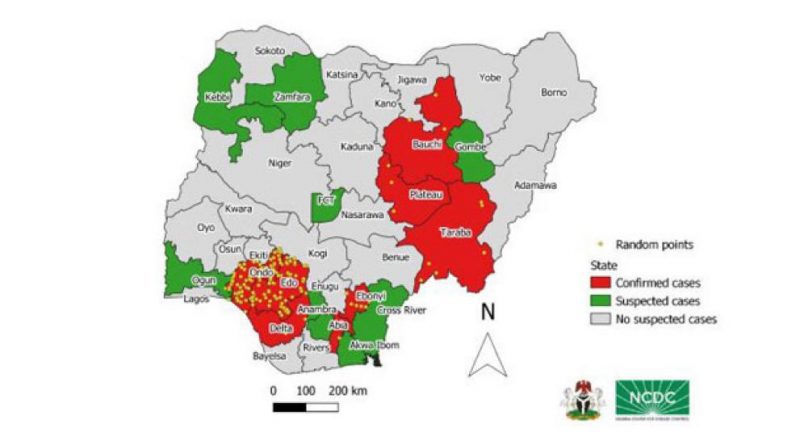 At least 24 people have died of Lassa fever in the country since the beginning of the year.

The Nigeria Centre for Disease Control (NCDC) confirmed this in its latest situation report on the disease.

According to the report, 398 suspected cases were reported out of which 163 cases were confirmed while 235 cases were found to be negative.

In total, at least one confirmed case was recorded across 32 Local Government Areas (LGAs) in nine states.

A breakdown of the report, which covers January 13 – 19, shows that 10 people died in the third week as 81 out of the 159 suspected cases reported were confirmed.

This occurred in 17 local governments across six states of the Federation.

Meanwhile, the Kaduna State government has confirmed a case of Lassa fever in Chukun Local Government Area of the state.

The Commissioner for Health in the state, Dr Amina Mohammed-Baloni, noted that the 35-year-old male patient was already receiving treatment at the designated infectious disease control centre in the state capital.

Mohammed-Baloni added that health personnel have been stationed at the centre to manage cases that may arise.

Elsewhere, Governor Babagana Zulum of Borno State has activated a standing emergency response with a call on health professionals to ensure the full containment of the disease, in order not to spread beyond the only case so far established.

He also directed that special attention be accorded to government-controlled camps and host communities associated with the forced migration of Internally Displaced Persons (IDPs).

Governor Zulum promised to make available whatever was required as part of measures to guarantee the safety of public health across Borno.

He, therefore, called on the team to work round the clock and take all measures necessary to ensure maximum control of any disease in the state.

In a similar development, the Lagos State government has set up a biosecurity team said to be working on the urgent capacity to identify any kind of viruses such as Lassa Fever and coronavirus.

The Commissioner for Health in the state, Professor Akin Abayomi, told reporters that isolation wards have been set up at the Mainland Infectious Disease Hospital in Yaba, to take in confirmed cases.

He appealed to residents to take proper care of their environment and avoid close contact with anyone showing symptoms of respiratory illness.