From various reports gathered from some notable Nigerians  by starnews.ng.com, there are information that the administration of President Muhammadu Buhari is allegedly recruiting repentant Boko Haram, into the Nigerian Army, the Nigerian Police Force and Civilian JTF.

The latest fresh alarm was raised by a human activist today, Deji Adeyanju.

Recall that in the month of June 2018, the leadership of the Christian Association of Nigeria (CAN) raised alarm that they had information that a number of ex-terrorists were allegedly being considered for recruitment into the Nigeria Police and Nigerian Army.

Pastor Adebayo Oladeji, Special Assistant on media to CAN President, Rev Dr Samson Olasupo Ayokunle, raises the alarm in a statement through a story published on Tuesday by Daily Post on June 19, 2018.

“I’m shocked at plans by the Buhari govt to recruit ‘repentant’ Boko Haram members into the police. Thank God the Christian Association of Nigeria has rejected the evil plan. “How can terrorists police us? Next, Buhari will recruit herdsmen in the army if he hasn’t already done so!”, he said

Adeyanju posted this on his tweeter page:

“Several media reports says they are massively recruiting so called repentant Boko Haram into the Nigerian Army, Civilian JTF and the Police. These are radicalized jihadists. Soon, our security agencies will be dominated by them and they will destroy Nigeria with these demons”

A twitter handler, Catherine, one of those who replied to the post of Deji Adeyanju, alledgly said that it is an age long practice in Nigeria. 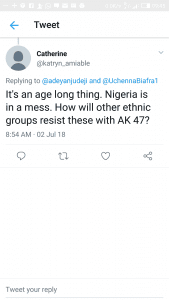