Skip to content
You are here:Home-Politics-Ekiti Decide: Photo of Two Bullion Vans Sighted With Aircraft In Akure Airport Offloading Items

Lere Olayinka, the director of Media and Publicity of Kolapo Olusola Campaign Organisation (KOCO), has raised the alarm over the alleged movement of huge cash by the federal government to Ekiti State for tomorrow’s governorship election in the state.

Meanwhile Starnews has few days ago obtained a photo of two Bullion Vans sighted with an airplane at Akure Airport offloading some unknown items from the airport. 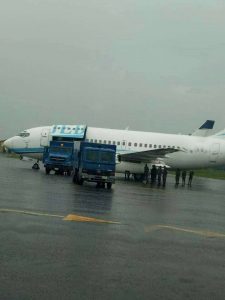 It was was not clear to our correspondent who sent the aircraft to the airport and it is not also clear as at the time of filing this report what exactly the aircraft was offloading into the Bullion Van at the airport. But starnews reliably gathered that the bullion van headed to Ekiti state after the items were  offloaded from the aircraft.

Part of the statement released by Lere Olayinka read :

“We called you here to intimate the public through your various media organisations of the movement of huge cash by the federal government to Ekiti State for the Saturday election.

Last week Saturday, two bullion vehicles were moved to the Akure Airport to evacuate cash brought from Abuja by a chattered flight.

The flight landed when it was raining and all staff of the airport were barred from going near the aircraft while the cash was evacuated into the two bullion vehicles.

After offloading the huge cash, the bullion van first moved to the Ondo State Government House in Akure from where they left for Isan Ekiti, the hometown of the APC governorship candidate, Dr. Kayode Fayemi.

We present to you and the entire world, video and photographs of the chattered aircraft as the cash was being offloaded from it into the two bullion vehicles.
From our preliminary findings, N2.5 billion cash was transferred by the Kebbi State Government to an account in UBA, Wuse Zone 4, Abuja. It was withdrawn immediately and moved with a private jet to Akure.

Also, apart from the N2.5 billion, another $50 million (about N18bn) was taking from the $321 million recovered from the late Abacha family.

Our question is, how can a government that claimed to be fighting corruption released billions of naira from the public coffers for the governorship election of a single State? Where is their fight against corruption?

We therefore call on Nigerians to note this wanton looting of public fund by the APC government to fund election of its members.

We must tell Fayemi and his APC that the conscience of the people of Ekiti cannot be purchase and we call on the people of Ekiti to resist the planned use of stolen fund to buy their votes of Saturday.
Lastly, let me use this opportunity also alert the public of the intimidation and harassment of PDP members by men of the DSS and policemen.

Already, Akin Fakorede, an officer of the Federal SARS has been posted to Ekiti State, ostensibly to play the same ignoble role that he played during the Rivers State election.

Let me say it clearly that no amount of intimidation will scare our people away from the polling units where they will vote for the PDP on Saturday.
We have the people behind us and they are more than ready to give our candidate, Prof. Kolapo Olusola Eleka their votes on Saturday.”

Nigerians have been reacting on social media over alleged movement of cash to Ekiti State.

Lot of mixed reactions have followed the tweets by Jackson Ude on twitter with some people saying it was the central bank of Nigeria (CBN) cash movement while some believe it was money released for the Ekiti election by federal government to buy votes for his candidate.

In a similar development, the nation newspaper has reported earlier today that a mysterious helicopter suspected to be loaded with raw cash from a governor suspected to be from the south South has landed in the helipad at government house in Ado Ekiti.

The Nation reported that people have been trooping into the government house in Ekiti State since morning on the allegation that governor Ayodele Fayose and his party, PDP, have been sharing money to the people against tomorrow’s election.