Skip to content
You are here:Home|Politics|Buhari’s Allies Allegedly Behind Borno Bomb Attack–FFK 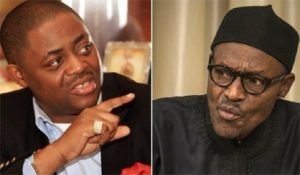 DAILY POST reports that no fewer than 20 persons were on Sunday killed and 48 others injured in a massive explosion in Damboa.

The State Police Command had said that at the sound of the explosion, personnel of the Nigeria police and members of the civilian JTF mobilised to the scene, and discovered twenty dead bodies and 48 injured persons in a suspected terrorist attack.

But reacting to the bomb attack, the former Minister wondered if Buhari will still be nominated as Boko Haram’s “representative in any future peace talks with Nigeria.”

In a tweet, Fani-Kayode wrote: “31 innocent Nigerians were blown up by @MBuhari’s Boko Haram allies in Borno state yesterday.