Skip to content
You are here:Home-News, Politics-BREAKING: PDP leaders suspend 8 members in Ondo

Leaders of the Peoples Democratic Party (PDP) in in Ileoluji/Okeigbo Local Government Area of Ondo State have suspended eight members from the Party indefinitely for anti-party activities.

Starnews Nigeria reports that this was announced in a letter of suspension signed by 21 stakeholders of the party led by Hon. Elvis Akinfiresoye, the Chairman Ile-Oluji/Okeigbo PDP, and Dr Jacob Gbakinro, the pioneer Chairman of PDP in Ondo State respectively.

Suspension of some Errant Members from the Party at Ile-Oluji in Ile-Oluji/Okeigbo Local Government.

The above subject refers.

At the meeting of PDP leaders, Local Government Executives and the Six (6) Wards Chairmen held at the Party Secretariat, Ile-Oluji today, Wednesday 15th June, 2022, it was unanimously agreed that the clandestine and overt anti – party activities of the following members:

Have become so inimical to the unity, peace, progress and electoral success of the Party in Ile-Oluji and environs, hence they are hereby suspended indefinitely from the Party forthwith for the following reasons:

1.They misled/lured other unsuspecting members to form another Party, called
“NEW PDP” which caused disaffection within the rank and file of the party and polarized it into PDP and NEW PDP. The attendant effect is that peace has not only eluded us but evil plot has been planned against the Party Organs and leadership with the intention to hijack the PDP and foist evil agenda on it.

2. They appointed Local Government and Wards Executives to run parallel government against the lawfully Constituted Authority. This action of these “Emergency leaders” has greatly fanned the ember of discord among members such as to pave way for the APC to win the forthcoming general election.

3. The vote of no confidence passed on Dr. Gbakinro J. A., Dr. Tunde Ogunsusi,
Hon. Tola Akinfiresoye and Chief Tayo Omoboyowa which was ill conceived, dishonourable, ill timed, in bad faith and full of vendetta was an act of insurbordination carried too far.

We recall the ugly incident when Dr. Gbakinro J. A.’s Hospital was barricaded for a whole day on 30th of April, 2022 when the owner, Dr. Gbakinro J. A. the Pioneer Chairman of the Party in the State suffered untold economic loss apart from the psychological trauma of the event. The campaign of calumny against and open disparage of the Party leadership in Ile-Oluji smacks of animosity borne out of envy.

4. Recently, on 8th of June, 2022. The Local Government Party Chairman, Hon. Elvis Akinfiresoye narrowly escaped being mobbed for daring to ask uninvited members to the thank you meeting with H/E Agboola Ajayi at Ile-Oluji to take their leave. This is rascality taken to a dangerous extent. Unfortunately, Prince John Adebawore who should know better stood in replacement for the Chairman.

5. Following closely to the above was the petition written by Hon. Henry Akinsuroju on Tuesday 14/06/2022 to the DPO, Police Station, Ile-Oluji erroneously alleging that Senator Nicholas Tofowomo threatened his life with
a view to implicating him and others. Whereas the Senator attended a meeting of ward Six at Bamikemo in company of the Local Government Party Executives, Women’s Leaders and some youths to douse the tension which had built up
as a result of anti-party activities of “New PDP” members.

The Police established that there was no criminal offence against the accused but these “emergency leaders” threatened to go ahead with polarizing the Party until they take over.

From the foregoing, it is clear that these ”Emergency” leaders are out to destroy PDP in Ile-Oluji in order to give victory to the APCwhich they worked for clandestinely in the last election.
In summary, these members are being suspended for gross insubordination and disobedience to constituted Party Organs, for deliberately fractionalizing the Party without any existing rancor and finally for disrespect to the leadership of the Party without any justification; all of which run contrary to Section 58(1) (b), (c), (f) (h) and (i)of our Party’s Constitution.

The above is for your information and necessary action please.

Thanking you in anticipation of your usual cooperation.

Find the attached list of undersigned who were privy to and part of the decision made: 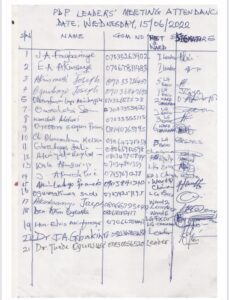