Skip to content
You are here:Home-News-Abiye Adeyemi popularly known as “Oil Money” emerges Chairman of IRDC

According to Kenneth Idusola-Stevenson, the Press Secretary to the Deputy Governor of Ondo State, the reconstitution of the new executives led by Abiye was necessitated after the tenure of the outgoing executives of IRDC led by Comrade Roland Akintoye expired on November 17, 2021, having completed their four (4) years service.

In a statement on Wednesday by Idusola-Stevenson, the newly constituted executives shall run the affairs of the Association pending when the PIA becomes fully operational or their tenure expires/terminates.

Starnews Nigeria reports that while the new executives are headed by its Chairman, Barr. Abiye Adeyemi Esq, Mr. Aiyesemitan Omomulere also emerged as the Secretary of the group.

The statement said that the new executives of the association will pilot the affairs of the body and will henceforth represent the communities for the next four years as the Petroleum Industry Act (PIA) is still undergoing a series of amendments.

Other members of the executive is contained in the document below: 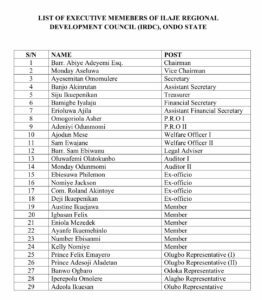