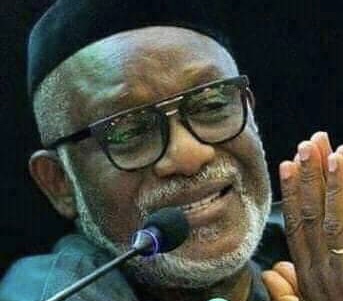 The removal of Pelemo was contained in a statement issued by the state Commissioner for Information and Orientation, Mr.Donald Ojogo.

The Commissioner said the sack is with immediate effect; and that it underscores the need to instill sanity and nip in the bud, divisive acts and tendencies inimical to the existing cordiality and cohesion in the administration led by the governor.

The statement was however silent on why governor Akeredolu sacked Pelemo.

But Starnews gathered on Monday afternoon from a close associate of Pelemo that governor Akeredolu allegedly sacked Pelemo far calling the wife of the deputy governor Mrs Ajewola Agboola Ajayi an acting first Lady on his Facebook page while wishing her happy birthday.

Starnews gathered that governor Akeredolu while traveling out of the country, handed power to the deputy governor to take charge of the affairs of the state through a letter he transmitted to the State House of Assembly.

This might not be unconnected with the reason Pelemo addressed the wife of the deputy governor as acting First Lady while wishing her happy birthday, Starnews has learnt.

See below the screen shot of Pelemo alleged offence according to the source.