Skip to content
You are here:Home|News|TraderMoney: Over 1,000 Vegetable Farmers In Lagos Laud FG Over Collateral Free Loans 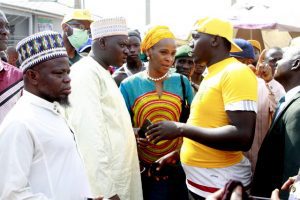 The farmers who have beds of Spinach, Pumpkin leaves popularly called Ugwu, Spring onions, Cabbage among others crops, expressed gratitude to the Federal government for the initiative of giving petty traders loan without collateral.

The President of Vegetable and Fruit Association in Lagos State, an ex-service personnel, Mr Suleiman Akanni, who said the farmers contribute largely to the economy ofbthe state and the country at large, promised that the farmers would use the loan to buy seedlings and fertilizer to improve and boost production on their farmlands.

Vice-President Yemi Osinbajo during activation of Traders Money in Lagos

On his part, the Coordinator of the Government Empowerment Enterprise Program, Mr Nwagba, assured traders in Lagos that TraderMoni initiative which had been in existence for two years is a continuous exercise stressing that any trader who had registered but not credited yet would soon receive bank alert.

Our correspondent reports that Vice President Professor Yemi Osibajo was received at the market by the vice Cchancellor of the Lagos State University, LASU, Professor Lanre Fagbohun among other dignitaries and artistes.

In the same vein, Alaba Rago traders in Lagos on Wednesday also expressed confidence in the initiative of the federal government tagged TraderMoni.
The traders say it is a sign of better things to come and a way of saying there is hope after all.

A beneficiary of the TraderMoni at Alaba Rago, Haruna Muhammad, a labourer who carries loads daily on his back to make ends meet said it is a sign that there is still hope for a better tomorrow.

” i will use the money to purchase a wheelbarrow to aid my business thereby increase my chances of getting bigger jobs. I am happy to collect this money and there is hope for us to live a better life” he said.

Also Ajoke, a bread seller said though she had been enrolled but yet to get an alert but optimistic that she would receive the money in no distant time. “Some of those who registered have gotten their money but I have not gotten mine” she said.

When asked what she will do with the money, she said she would expand her business by including other items to her stock. “Now, I sell only bread but if I have the money, I will also sell Butter (Margarine) or even minerals. ” she concluded.

A supervisor with TraderMoni Programme , Olawale Johnson stated his role at the event . “What we are doing here is to sensitize targeted beneficiaries on how to access the loan and teach them modalities on how to pay back, to benefit higher amount.

He further explained that beneficiaries, who were selected after a registration process, could receive up to N100,000 as loans from an initial sum of N10,000.

This empowerment has been done in Ojuwoye Market, Ketu, Oshodi, Bariga, igando, Ile Epo, Ikotun, Alaba Rago and Vegetable farm Market all in Lagos State . It will also be launched in Bodija and Oje Markets in Ibadan on 15th November and Ikenne and Ijebu Ode on the 16th Nov 2018. 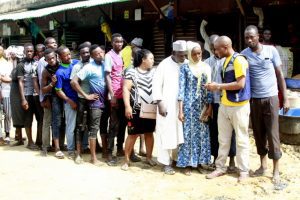 Also from north east to west , south east to the west and south south , the programme has been initiated. The federal government targets two million petty traders by the end of 2018.

To register, a trader needs to provide his name, date of birth, address and phone number.

He also said that the traders qualified for the programme would receive a text message and a four-digit personal identification number to enable the transfer of the fund to their bank accounts.