Skip to content
You are here:Home|News|Tension In Ondo As Ocean Claim 500 Meters of Ayetoro Community In Ilaje

There is palpable fear and unusual tension in Ondo State as the Atlantic Ocean in Ayetoro Community of Ilaje local government of the state has overtaken its bank, claiming about 500 meters of Ayetoro community’s landscape with many houses and lands destroyed.

According to statement made available to Starnews by Ehinmowo Tokunbo, the Co-Convener of Ilaje Advancement Forum, (IAF), the sea encroachment has claimed about 500 meters of Ayetoro community’s landscape and it has now continued its devastating effects on the noble town by destroying more land and buildings on daily basis.

Part of the Statement read:

“The subject in picture among others is Baba bishop Eretan’s house at the risk of collapsing anytime from now. This is too bad for the community as the government is turning a deaf ears to the  save our soul memo and yearnings everyday. 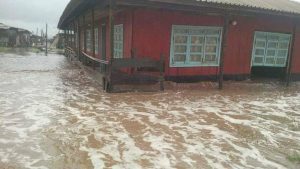 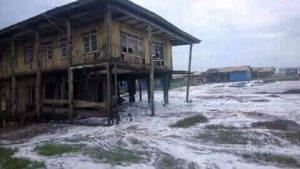 Maybe they want to wait until the whole Ilaje communities is washed into the sea before they will act positively and come to our rescue.

And we have prominent sons and daughters in the high places concentrating on rubbish trivial issues instead of hammering vehemently on the need to safe ilaje nation from this catastrophical occurrence.

We have OSOPADEC, NDDC, ministry of environment and senators and representatives in the national assemblies who are busy stuffing up their private purses instead of concentrating on the developmental chores of why they were established or elected. 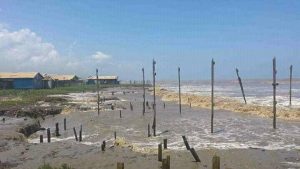 This is a very pathetic and melancholic situation. Election is drawing nearer now and they will still come and brainwash people with their devilish sugarcoated speeches to earn our votes. Hmmmmmmm, rural people are watching and history is recording”, the statement added.