Skip to content
You are here:Home-News-Sen Tofowomo distributes 200 motorcycles to farmers in Ondo to boost agriculture

Tofowomo, while distributing the motorcycles at Ileoluji town, the headquarters of Ileoluji – Okeigbo Local Government Area, said the move was to ease the challenges of transportation in agricultural businesses in the rural communities of Ondo South.

Starnews Nigeria reports that the Senator charged them not to commercialise the motorcycles but to use them for their mobility to farms because of the challenges of transportation with rural communities of the Senatorial District.

The programme is second of its kind. And it came two weeks after the Senator trained 100 youths in ICT and empowered them with personal computers (laptops).

This brings the total number of motorcycles distributed to farmers in Ondo South to 350.

During the programme, youths of the Senatorial District led by Ibitayo Oke endorsed the Senator for a second term, having scored him so high in performance from 2019 to date.

Speaking at the event, the Senator said:

“This is the second time I am adding value to Ondo South farmers to boost agriculture. Last year, I gave out 150 motorcycles to farmers and today, I distributed 200 motorcycles to them. This will ease the challenges of transportation in agricultural businesses in the rural communities of Ondo South.”

“Better things are still coming, what you see today is a tip of the iceberg, I will continue to empower my constituents and won’t relent in my effort to develop Ondo South by facilitating more projects to the Senatorial District”, he said. 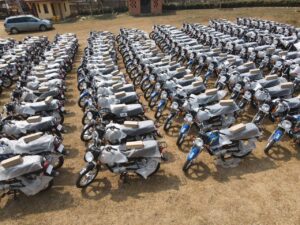 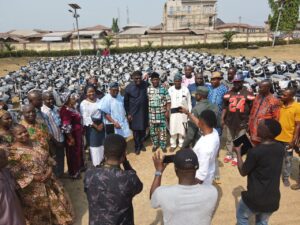