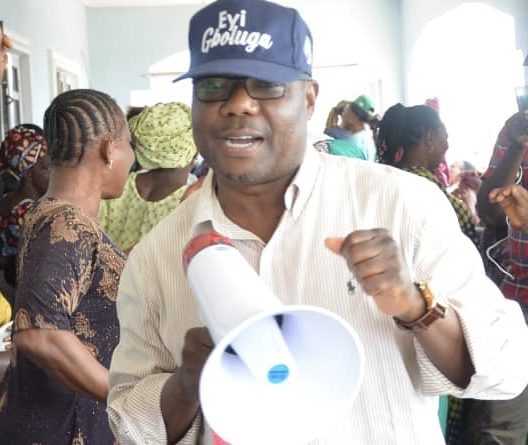 A group under the auspices of Ikale Liberation Vanguard (ILV), has berated Hon. Ikengboju Gboluga, the deputy governorship candidate of the opposition Peoples Democratic Party (PDP) and the Lawmaker representing Okitipupa/Irele Federal Constituency at the House of Representatives, for allegedly, according to them, prostrating for the Peoples of his constituency to canvass for votes instead of pointing to his achievements as his selling point ahead of the October 10, 2020, governorship election in Ondo State.

”Yesterday is history, tomorrow is a mystery. Dear honourable Ikengboju Gboluga, it is quite unfortunate to let you know that your yesterday has been marred by all manners of ingratitude, negligence and egocentrism. What kind of tomorrow do you want such yesterday to produce?”

”Sir, we are constrained to keep you in the know that it is too late to cry while the head is already off. We all took the bull by the horn and massively voted for you but to our dismay, you have found solace in abandoning us. We must confess to you sir, no amount of consultations, reconciliation or prostration can make you have our mandate again; you have taught us unforgettable lessons and the scars will forever be fresh.”

”In a time like this sir, your past achievements are supposed to be speaking for you. Your case is a replica of the prodigal son who puerilely took and extravagantly messed up his own inheritance, came back regrettably and was celebrated. But behold sir, our group as a determinant factor of who wins Ikale elections will never celebrate you because a trail has convinced us.”

”You have callously abandoned us. Now that you have learned to fly without perching, we also learned to shoot without missing. Our votes will count belong to us. Our votes are our guns; we’re ready to shoot.”

But reacting through his Media Aide, Oyeniyi Iwakun, Gboluga said his numerous programme cannot be overemphasised.

”First of all, it is important to understand that Hon. Gboluga was distracted with avoidable litigation by the APC candidate, Albert Akintoye immediately he was sworn in around June 2019. This legal tussle lasted till November 2019. The COVID 19 pandemics also delayed activities of Government all over the world in 2020.”

”Gboluga at the inception of his swearing-in appointed over 62 personal aides and has been paying them to cushion the effect of unemployment (an unprecedented feat in the history of Okitipupa/Irele federal consistency).”

”He had initiated and executed several training programmes (including agriculture and entrepreneurship) for the empowerment of his constituents.”

”He has dished out scholarships for indigent students, lent his voice to debates at the lower chamber to advance the interest of the Ikale race”.

”The 2020 Constituency project is still in the offing, and will definitely be executed in few weeks time, then, I am sure the narratives will change.”

”It is also noteworthy that the house of representatives is a legislative wing of government where lawmaking is the major assignment. Other oversights are substantially dependent on the discretion of the executives…And Hon. Gboluga has been deploying all required skills to lobby in the interest of his constituents.”

”We may need to exercise enough patience so that the proposed life-changing programmes in the 2020 budget are executed even as it is important to note that Gboluga has only spent a year and few months in the National Assembly so far,”