For his outstanding leadership quality and performance in Public Service, Otunba Nicholas Tofowomo, the Senatorial Candidate of the People’s Democratic Party (PDP) in Ondo South in 2019 election, on Monday, received a meritorious Leadership Award of Excellence as “Role Model in Public Service”. 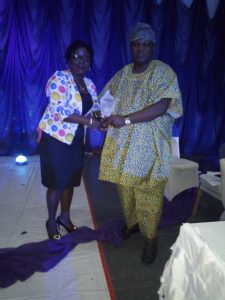 Presenting the Award on behalf of the organisation, Mrs Isijola, who represented Chief Niyi Akintola,SAN, said Tofowomo was recognised for distinguishing himself in public office and enhancing good governance.

According to Isijola, “Tofowomo’s hard work while in office as a former commissioner for transport in Ondo State, is unprecedented.” 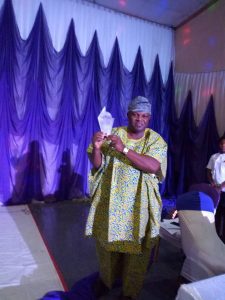 While thanking the management of the Magazine for the recognition, Tofowomo however promised to make a difference if elected Senator by the electorates in Ondo South in the forthcoming 2019 election.

Prominent Leaders of PDP from across the 18 local governments of Ondo State, friends, family and associates graced the occasion.