Members of Traders Union in Ore business community, coalition of electorates, widows and single mothers, under Odigbo Local Government of Ondo State, on Wednesday, rejected the second term bid of Senator Yele Omogunwa of the All Progressives Congress (APC) and endorsed Otunba Nicholas Tofowomo of the opposition People’s Democratic Party (PDP) as their candidate for the house of Senate in Ondo South Senatorial District ahead of the general elections. 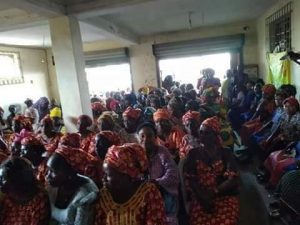 The groups also vowed to work against the reelection of President Muhammadu Buhari and all the candidates of the ruling All Progressives Congress (APC) to support the PDP and its candidates ahead of the coming election, due to what they called monumental failures recorded at all levels by the APC.

The President of Traders Union in Ore, Mrs Shileola Akingbola, who spoke on behalf of the coalition of groups during an interactive meeting with Tofowomo Campaign Organisation in Ore community, said that the incumbent Senator, Yele Omogunwa, “is an epitome of failure and the worst Senator in the history of Ondo South, while she described the administration of the ruling APC at the State and Federal as  symbol of poverty and unprecedented hardships”. 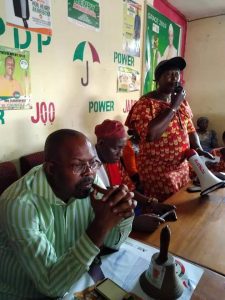 The Director-General of Tofowomo Campaign Organisation, Hon. Banji Okunomo, who addressed the coalition of groups on behalf of the PDP and all its candidates, urged the aggrieved electorates to vote out all the candidates of the APC in the coming election.

Okunomo said Nigeria is in a bad shape under the ruling APC. ” Nigeria is not in good shape as I speak. The only option left for the electorates to make Nigeria better in this 2019 election is to vote out all the candidates of the APC,” He added.

Okunomo assured the group of people that Atiku Abubakar, Nicholas Tofowomo, and all the candidates of the PDP will heal their wounds, and restore their businesses through the restructuring agenda of the opposition party if they exercise their franchise in the forthcoming election to vote out the bad government of APC at all levels.