Skip to content
You are here:Home-News-Ondo South Drags BEDC To Presidency Over Blackouts

The representatives of Ondo South in Ondo State under the aegis of Bring Back Our Light Group (BBOL) has reported the Benin Electricity Distribution Company (BEDC) to president Muhammadu Buhari through an official complaint letter sent online via the office of the secretary to the government of the federation (SGF)  by the convener of the group, pastor Olumide Akinrinlola.

In a comprehensive letter addressed to the president through the office of the SGF, pastor Akinrinlola explained the history of the blackouts in Ondo south of Ondo State and lamented how BEDC flouted several  directives by government including the Electricity Regulatory Commission (NERC) to restore the affected councils back to the national grid.

Part of the letter read:

“We visited Abuja twice in conjunction with some of our representatives to represent the four affected councils to substantiate proof of illegal disconnection by BEDC before the electricity commission, (NERC).

At Abuja, the following documentary evidences were submitted to NERC:

1. Due diligence audit report of the committee set up to review the outstanding debt owed BEDC.

3. Bills for houses which were prepared after disconnection.

4. Receipts of payment to BEDC for meters yet to be supplied till today.

5. Bills showing credit balances before disconnection in 2014; and estimated bills given to customers, despite having meters.

6. samples of bills paid up to date by customers before disconnection which prove that thousands of people are not owing.

7. Billing history of Ayila community in Ogun State which was padded into Okitipupa bills were also tendered.

8. Also submitted were samples of billing register history on report of communities without electricity supply over 10 years ago and yet, they were billed by BEDC.

Following the submission of documentary evidences, NERC summoned a meeting of all the stakeholders, including BEDC to her office in Abuja on July 6, 2017 with a view to finding a lasting solution to the crisis.

The meeting was presided over by Chijioke Obi, Deputy General Manager, Customer’s Complaint, at NERC Office in Abuja.

At the meeting, we succeeded to prove beyond doubt that all the affected councils were disconnected illegally by BEDC with documentary evidences presented.

At the meeting, resolutions were taken by NERC and BEDC was directed to resume back to work and reconnect the affected communities immediately. NERC also said BEDC should reconnect us before talking about payment since they initially disconnected us illegally. NERC also said that both parties should reconcile the disputed debts two weeks after resumption of BEDC at site.

The resolution was contained in an official letter addressed to the chairman of due diligence audit committee and copy of same letter was also addressed to Hon. Mike Omogbehin, member house of representatives who led us in discussion at NERC Office with Ref number : NERC/05/CA/CCU/BEDC/33/17/1112 following the proof of illegal cut off presented to NERC on July 6, 2017 by our people.

Copy of the letter is hereby attached. 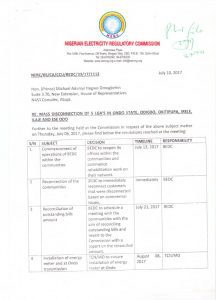 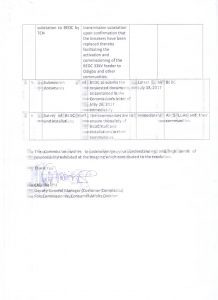 Till date, this directive was not obeyed by BEDC. They refused to reconnect all the affected councils in flagrant disobedience to the commission (NERC).

In the course of account reconciliation, all electricity bills preceding Pre privatisation were deleted from the bills in line with the directive of NERC. The account reconciliation team also succeeded to delete Ilaje Local Government who was not having light for the past ten years from BEDC debt profile and it was discovered in the course of reconciliation that Ilaje Local Government is even having credit balance of Two Million Naira (N2, 000,000) only with BEDC which BEDC also confirmed as true.
It shows that BEDC is also indebted to One of the local government (ILAJE LG) that were thrown into darkness.

The N269m they leveled against us was based on constant estimation as consumers meters were not being read by BEDC.

We have written NERC officially to inform them about this development especially to let them know that BEDC did not obey their directive to reconnect us back to the national grid before payment as instructed by NERC. They promised to do something about this more than a year now. Ever since then, we have not heard from them even after subsequent reminders and phone calls to inform them that BEDC did not obey their directives.

Twice, our Royal fathers met with the current state government with BEDC officials and the government implores them to go and obey the directive of NERC by restoring electricity to the four affected councils even before talking about payment.

On the same issue, there were lot of motions on the floors of both states and national assembly. What about the visit of our leaders to the Hon. Minister; the subsequent visit of the minister culminating in the eventual linkage of power to Omotoso, all the efforts and barrages of petition to NERC, the highest regulatory body on electricity in Nigeria; in spite of all these efforts and many more others I cannot list here, BEDC REFUSED to connect us to the National grid.

BEDC has flouted every directives and persuasion from the honourable minister of power to connect Omotoso community, the host community of Omotosho power plant even when there is light in their back yard. The step down has been energized. Yet, BEDC disobey the minister by not connecting the host community back to the national grid.

BEDC disobeyed Ondo State government, and they have severally said it in the open that the governor of Ondo State cannot do them anything as they (BEDC) claim the government does not have power over them not minding the fact that the commission (NERC) had officially directed them to work.

Sir, we are ready to pay what we are owing. In fact, we had raised some fund for this purpose. But it was clearly established against BEDC that we were illegally disconnected from the national grid. It is expected that BEDC should restore electricity back to affected councils before we pay them. Our economy has been paralysed in Ondo South with resultant to collapse of small scale businesses and job losses due to lack of electricity even when electricity has improved under this current administration of President Buhari.

We felt going to court may prolong the age long darkness created in our land by BEDC. Hence, we decided to send this petition to president Muhammadu Buhari through the office of the SGF.

We know the president is a no nonsense man with high level of obvious integrity.

This is our story so far. The president should deliver us from the hands of the most powerful disco company in Nigeria (BEDC)

Thank you sir for your anticipated response on this. We believe in the integrity of Mr President and we have confidence in his administration especially in ensuring common Nigerians are not cheated”, the statement added