Skip to content
You are here:Home|Politics|Senate 2019: Buhari Sidetrack Ore Community, Others, In Rail Project — Tofowomo

According to him, “Ore community is the major commercial city in South West that link the South West, South South and South East together in Nigeria”, saying that an important city like Ore community was neglected in the rail Project of the Buhari led administration due to nepotism.

He accused the APC administration of failing the people not only at the Federal level but also in Ondo State under the leadership of Arakunrin Rotimi Akeredolu. He said “ordinary traffic management system has failed and collapsed under governor Akeredolu.”

He accused Akeredolu of not only failing to deliver dividends of democracy to the people of Ondo State but said that the government of Akeredolu has also failed in maintaining the legacies left behind by past administration of Dr. Olusegun Mimiko.

Tofowomo dropped this hint while addressing large supporters at the Ondo State PDP state secretariat in Akure after he picked the party’s PDP notification of interest and requirement form for the house of Senate in Ondo South of Ondo State.

Asked what gave him the conviction to aspire to contest for the House of Senate in Ondo South, Tofowomo was very quick to identify the potentials of Ondo South of Ondo State which were not keyed into by the government both at Federal and state levels due to poor representation in Ondo South at the red chamber of the National Assembly.

He used the coastal line at Araromi in Ilaje local government and the bitumen at Oloda community both under Ondo South of Ondo State as case study of some potentials available in Ondo South that were not legislated upon by previous representatives to develop and bring civilisation to Ondo South community.

While addressing the press, Tofowomo reels out his master plan for the people of Ondo South if elected. He said he is fully prepared with the foreknowledge of what he is going to the Senate to do for his people.

He accused the state government and some APC leaders of using the agony of the peoples in Ondo South over the aged long darkness created by BEDC to campaign in the last election to seek the support of the peoples without anything done till date to restore electricity back to affected councils after close to two years of the APC administration in Ondo State.

He promised to legislate on the following and make them beneficial and productive for the people of Ondo South in Ondo State :

Tofowomo also assured the leadership of PDP that he won’t be an ingrate that will leave the party for another political party if given the the ticket of the PDP to contest for the senatorial election if peradventure he wins the general election.

He vowed to be the first man among the party candidates that will abide by the rules of the party, PDP, by dropping his resignation letter with the state secretariat of the party at state level as means introduced by the party to mitigate unnecessary carpet crossing after election are won by candidates.

Tofowomo promised to be accountable to his people in Ondo South if given the chance to run under the PDP. He advised residents of Ondo South to get their PVC ready and not mortgage their votes in the coming general election in the state.

Speaking on behalf of the leadership of the party, the state chairman of PDP in Ondo State, Engr Clement Faboyede said that the APC led government has not only failed the people but has also failed woefully in all areas.

He advised the people of Ondo state to do to APC what was done against APC by the people of Anambra State during the reelection of governor Obiano.

Faboyede alleged that APC shared N1M in each polling unit in Anambra State for the electorates with each person collecting minimum of N20, 000 but said the people of the state eventually voted for candidate of their choice. He said Ondo State citizens should vote for their conscience, and preferred candidate instead of voting for money which he alleged happened in the last governorship election in Ondo State with people now suffering and regretting their action according to him.

Faboyede acknowledged the performance of Otunba Nicholas Tofowomo, the PDP aspirant during his reign as commissioner under former governor Mimiko. He said he has no doubt that the aspirant can win the general election if he wins the PDP primary election.

Upon interrogation, Hon. Solomon Bitire, former chairman of Okitipupa local government said that the failures and deception of Arakunrin Oluwarotimi Akeredolu in “flagging off projects without contractors, (non existing projects), and projects without budgets,” are sufficient enough for the people of Ondo State to vote out the APC and mobilise support for the PDP in Ondo State.

Also speaking at the occasion, former special assistant to governor Olusegun Mimiko, Hon. Akindele Babtunde Labuta, said that he was convinced to give support to Mr Tofowomo to vie for the Senate in Ondo South because of his track record as former commissioner of transport in Ondo State couple with the fact that Mr Tofowomo already has the foreknowledge of what he is going to the House Senate to do for his senatorial district.

Asked him to compare the current administration of Akeredolu with that of his predecessor, Mimiko, Akindele said that the word “performance” and “failures” are words and opposite that cannot be compared together. He said that governor Akeredolu has already confessed by himself during his swearing in ceremony that he only came to consolidate on the achievements of the former governor Olusegun Mimiko, saying that there is no how performance can be compared with failures.

Many notable Leaders of the party from the six local governments of Ondo South were present at the party’s secretariat to give support to Mr Tofowomo’s political aspiration for the senatorial seat of Ondo South under the PDP. 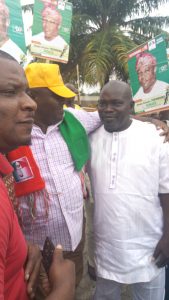 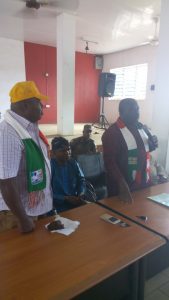