Skip to content
You are here:Home-Entertainment-Nollywood Actor, Odunlade Adekola Graduated From UniLag

Nollywood actor, Odunlade Adekola has officially graduated from the University of Lagos, UNILAG, as he convokes with the 2017/2018 set. 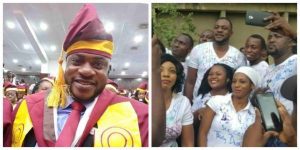 He posted a picture on his Instagram handle, bringing his works in the movie into it.