Skip to content
You are here:Home-Politics-Nigeria Constitution Has Been Suspended By Buhari, Fayose Raises Alarm

Nigeria Constitution Has Been Suspended By Buhari, Fayose Raises Alarm

The governor of Ekiti State, Mr Ayodele Fayose has raised the alarm that democracy in Nigeria under President Muhammadu Buhari is seriously under threat, alleging that the constitution of Nigeria appeared to have been suspended under the current administration of President Buhari.

Mr Fayose also lamented the destruction of the judicial and legislative arms of government by the government of President Muhammadu Buhari. He said “even when Nigeria was under military rule, our judiciary was not this ridiculed, with the government choosing which court judgment to obey and which one to ignore.”

“President Buhari’s persistent refusal to obey court orders, refusal of his men to obey summons by the National Assembly and most importantly the withdrawal of $496 million from the Excess Crude Account (ECA) without approval of the National Assembly and inspite of pending court case are indications that the constitution has been suspended and Nigeria returned to full-fledged dictatorship.”

“Democracy is endangered when the executive arm of government goes about demonizing the Judiciary as being corrupt and the National Assembly tagged as a gathering of rascals who are contributing nothing to governance. Unfortunately, that is what the Legislative and Judicial arms have suffered under this government.”

“In disobedience to court order that they should be released, the leader of Islamic Movement in Nigeria, Sheikh Ibrahim Zakzaky, and his wife, Zeenat, have been detained for more than two years without trial.”

“Also, Col. Sambo Dasuki (rtd) has been in detention for over two years even when many courts in Nigeria and the ECOWAS Court have ordered for his release.”

“Lovers of democracy in Nigeria should therefore be worried and the international community must intervene and prevail on the President to allow democratic institutions to function in the country,” the governor said 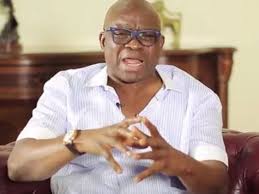 described the Legislative and Judicial arms of government as the pillar of democracy anywhere in the world.