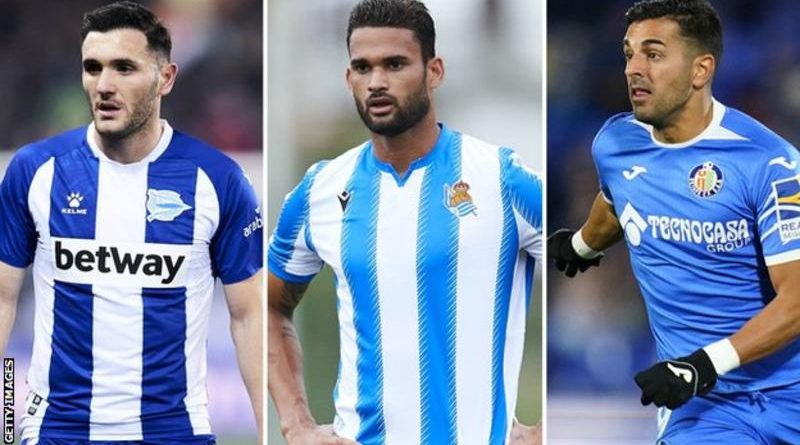 This is how it could happen and who they could be after.

Uruguay striker Suarez was ruled out for fourth months in early January with a knee injury, while it was confirmed on Tuesday that French forward Dembele would be sidelined for six months after surgery on a serious hamstring tear.

It was the injury to 22-year-old Dembele that forced Barcelona’s hand to look for reinforcements upfront.

Under La Liga rules, if a player is out for more than five months, then clubs can apply to sign one player from another La Liga club or bring in any out-of-contract players in Spain.

Barcelona, second in the table and three points behind leaders Real Madrid, have sent a medical report to the Spanish top-flight, whose medical commission will review Dembele’s injury and decide whether to authorise the club’s request for an emergency transfer.

But there is no guarantee the commission will approve Barca’s request, as BBC Radio 5 Live European football expert Guillem Balague explains: “The medical reports have to be checked by independent medical advisers and it is not guaranteed they will accept Dembele will be out for six months, as when he suffered the same injury in a different leg he was out for three and a half months.”

If they are given permission, that could see Barcelona strengthen at the expense of a rival.

“It is considered an emergency option that any team can use and a rule that has been approved by the clubs themselves,” added Balague.

“[Barca boss] Quique Setien has told the club he wants a striker. He feels Antoine Griezmann is not doing the job properly and he could be used somewhere else, between the lines toward the left-hand side.

“A signing is something that is necessary and everyone agrees that is the case including sporting director Eric Abidal and technical secretary Ramon Planes.”

Balague says Barca are after a versatile player who can play inside and outside the box and one who is happy to be behind Suarez in the pecking order when the Uruguayan returns.

Among their targets are former Arsenal and West Ham striker Lucas Perez, who is currently at Alaves and has scored nine goals in 22 games this season.

They are also interested in Getafe’s Angel Rodriguez, who has a 9m euro (£7.5m) buyout clause. The 32-year-old has scored 13 goals for the Madrid club who sit third in La Liga – and Getafe are “desperate to sell him” and see the sale as a “huge opportunity” for a player who they signed on a free transfer.

They have also tried Roger Marti from Levante, but received a no from the Valencia club, and Real Betis’ Loren, which is unlikely, while they were also interested in Real Sociedad’s Willian Jose.

The Brazilian striker, 28, who has scored eight league goals this season and has previously played for Real Madrid, apologised to Real Sociedad fans after a move to Tottenham fell through last month.

Asked about the links with Barcelona, Real Sociedad boss Imanol Alguacil referenced the player’s buyout clause earlier this week when he said: “If they put the 70m euros on the table then fine, there’s nothing left to say.

“The whole thing about Willian Jose is starting to get a bit much. He’s our player and he wants to continue to be our player. I don’t know how long for but as far as I understand it he’ll be with us until the end of the season.”

Balague believes a transfer of Willian Jose to Barca would have a knock-on effect involving Martin Odegaard, who is on loan at the Basque club from Real Madrid.

“Real Sociedad are worried if they let Willian Jose go to Barcelona, maybe Real Madrid will call off Odegaard’s loan deal in the summer, so they said no to selling him,” he said.

Speaking on Friday, Setien said it would be “preferable” if the club were given permission to sign a striker, but they will find a way to adapt if not.

“Dembele’s injury set us back a lot and put us in a risky situation, but you always have a plan because you play with 11 players,” he said.

“I hope that it is possible, but if they don’t let us sign a player then we will adapt.”