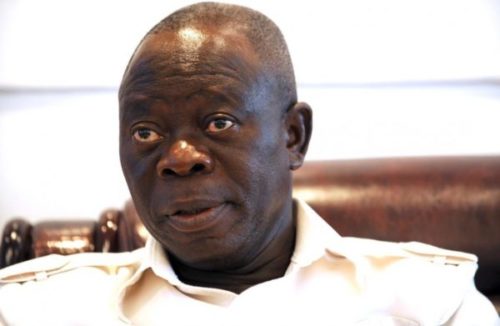 The National Chairman of the ruling All Progressives Congress (APC), Adams Oshimhole, has inaugurated two campaign councils for the forthcoming governorship elections in Kogi and Bayelsa states, with a charge to the Peoples Democratic Party (PDP) to go and learn new tactics of winning elections legally as electoral outcomes would no longer be determined by the barrel of the gun.

Both councils have 56 members apiece.

Oshiomhole, who gave the charge on Friday in Abuja while inaugurating the councils, was specific that the people of Bayelsa have never really determined their leaders because their votes never counted.

“In Bayelsa, the heart of the people will be turned to elect a man that will make a difference, that will demonstrate that in a genuine democracy, very ordinary people who connect with their people, who understand and live with their people and share the joy, pain and aspirations of their people, even if they do not have the history of a political dynasty can rise to become a governor and I believe that is the story of our candidate in Bayelsa.

“The reaction of PDP shows they are in trouble. My very good friend, Gov. Dickson is in trouble, but I assure him that his labour pains will soon be over by the time we win the elections.

“We take these two elections very seriously because we believe in the power of the ballot, we believe that the issues should be contested in a peaceful environment and not by the power of gunshots which has been the tradition of the opposition and we know that people want a change.

“Let me use this opportunity to assure the opposition that we are ready for campaigns, it is not a fight, it is not a war. The only thing we will insist on is that the votes must count because Bayelsans are not used to votes being counted. They have to be encouraged to understand that the votes will not only be cast in a free and fair atmosphere, but it also must not be through the power of the barrel of the gun. The PDP must know that and learn new tactics in winning votes and not fight wars,” Oshiomhole charged.

Kano State Governor, Umar Abdullahi Ganduje, who spoke on behalf of Chairman of the APC Governorship Campaign Council for Bayelsa state, Gov Abubakar Badaru of Jigawa, said it was time the APC took over the governance of Bayelsa.