Skip to content
You are here:Home|News|I Can Quit As VP Within Short Notice To Protect My Faith — Osinbajo Reveals

Vice President Yemi Osibanjo has said that he prefer to vacate his position as the vice president of Nigeria than compromising his faith because of politics.

Osinbajo drop this comment while responding to questions raised by some Christian leaders at the stakeholders’ meeting held at the new Banquet Hall of the Benue State Government House, Makurdi.

The vice president was said to have stated clearly that 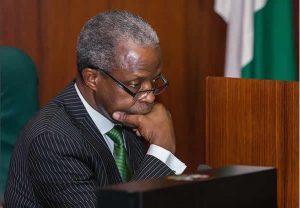 under no circumstances would he give up his faith but would rather vacate his position as the nation’s Vice-President at the slightest attempt to cause him to abandon his Christian virtues.

One of the speakers, the Catholic Bishop of Gboko, His Lordship, Williams Avenya, had reminded Osinbajo of the then-presidential candidate of the All Progressives Congress, Muhammadu Buhari’s campaign promises that he would not Islamise the country and would protect the interest of all Nigerians including citizens of minority ethnic groups if voted into power.

Quoting Buhari, the bishop said, “My deputy is a Christian and there is no way I will Islamise Nigeria with many Christians in my team.”

Avenya noted that the killing of Christians and members of the minority ethnic group particularly in Benue State had proved that the Federal Government under Buhari was not living up to these promises.

Facing Osinbajo, the bishop said, “The point I’m trying to make is that a day is going to come when you, as the Vice-President, will bear the brunt of that problem of injustices in our land, especially those perpetrated on smaller ethnic groups that have no one to fight for them.

“So, as a Christian person, exonerate yourself from this situation,” the bishop advised the VP.