Skip to content
You are here:Home-News, Uncategorized-Fresh: Shiite Members Clash With Police In Abuja

*Is Buhari Greater Than Our Constitution —- Deji Adeyanju

Member of the Islamic Movement in Nigeria (IMN) on Monday clashed with the police at the Federal Secretariat complex in Abuja. 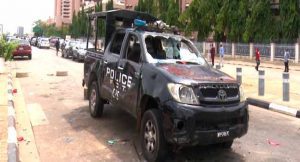 The Shiite members stormed the area to protest the released of their leader Ibraheem El-Zakzaky, and his wife from the custody of the Department of State Services (DSS).

Meanwhile, Mr Deji Adeyanju, a renown social and political activist has said that President Muhammadu Buhari is not greater than Nigerian constitution and the court. He wonder why the president has deliberately refused not to obey the law court of the land.

Adeyanju tweetted as follows in a separate tweets :

“How can Buhari be greater than our constitution and our Courts? How can a country be reduced to a JUNGLE?

Why are the Shiites been treated like war criminals as if they are not Nigerians?”

“I have had the privilege of advising the security agencies. Release this man and his wife as ordered by the court & stop attacking them during protest.

No they will not. The big security Ogas said Buhari says over his dead body for Zakzaky to be released. Is Buhari above Court?”