Skip to content
You are here:Home-News-FG Asks Court To Reverse Self On Melaye’s Bail

FG Asks Court To Reverse Self On Melaye’s Bail

The Federal Government has yesterday asked the High Court of the Federal Capital Territory in Maitama to revoke the bail it granted to Senator Dino Melaye over an allegation of false alarm.

The Federal government asked the court to reverse self on the bail because senator Dino Melaye was absent in court for the commencement of hearing on the two criminal charges preferred against him by the office of the Attorney General of the Federation.

Labaran Shuaibu, lawyer to the Federal government prayed the court to reverse the bail or in the alternative, summon senator Melaye’s surety to appear and show cause why he should not be committed to prison for the absence of the defendant (Melaye).

The defence counsel, Ricky Tarfa, however, informed the court that his client has been charged before different courts recently, he was wheeled to court on a stretcher in one of the cases.

He stated further that the government’s request for the bail to be revoked could only be made in a situation where the whereabouts of the defendant cannot be ascertained.

After listening to both parties, the trial judge, Justice Olasumbo Goodluck, said accepting the narration from the defence lawyer would amount to receiving evidence from the bar.

She said he ought to be aware of the necessary step to take if his client was indisposed to attend his trial, stressing that the Administration of Criminal Justice Act, ACJA, 2015, already made provisions on how criminal trials should be conducted in the absence of a defendant. 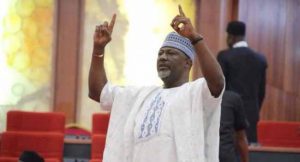