List of 49 senators that appended their signatures in favour of the failed illegal impeachment of the Senate President Bukola Saraki and his deputy Ike  Ekweremadu yesterday have been revealed.

Recall that in the early hours of yesterday (Tuesday), the operatives of the Department of State Services, DSS, invaded the National Assembly and took over the complexes.

The DSS operatives also denied many lawmakers, especially those loyal to Saraki and Ewkeremadu access to the chambers while allowing access to those under the All Progressives Congress, APC.

Below papers revealed the list of Senators of the Federal Republic of Nigeria who have already appended their signatures to perpetuate the impeachment of the Senate President and his deputy. 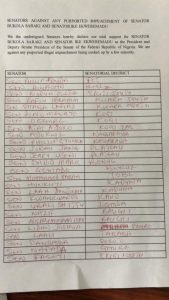 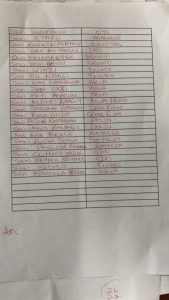