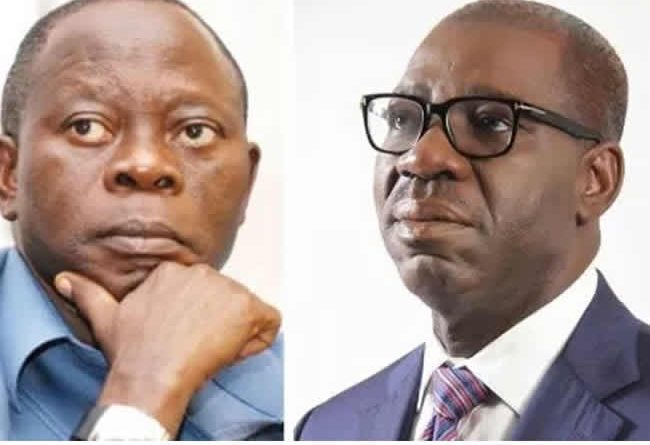 EPM co-convener, Henry Idahagbon, had earlier advices that  Obaseki  should call for a peace meeting.

But  Obaseki, who spoke through  his  Chief of Staff,  Taiwo Akerele, on Saturday,  said  the EPM  was  not  recognised by the APC constitution.

He said, “EPM members cannot be running to Oshiomhole; its not possible. It means that he is taking sides. As a leader, it is expected that he should give opportunity to all sides and we are ready to go to Oshiomhole when he provides leadership, but those people must first drop the toga of EPM. We cannot talk to them on the basis of their membership of the EPM. I am a loyal partyman. I am loyal to the APC. I am loyal to Buhari, I am loyal to the APC National Leader (Asiwaju Bola Tinubu).”

While acknowledging  Idahagbon and Samson Osagie’s contributions  to Obaseki’s victory in 2016, Akerele insisted that the EPM   was an illegal group.

“If anybody has any issue, they should come out. Has anybody told you that they are against the policies of the government? No. These are our brothers, these are our comrades. I am using this opportunity to call on them. Come let us reason together as the Bible says so that we can iron out issues. Is it Idahagbon? Is it Samson Osagie? Anybody? They are our brothers and we want them to come so that the APC will be one united family and one united party so that together we can campaign for the second term of Obaseki because what we are looking at is how the future generation will be employed.

He faulted Oshiomhole for role in  the crisis, saying it was not good for the party.

Akerele added, “He is our national chairman and former governor of Edo State that is well respected. In fact,  we don’t only need him in Edo  we need him in Nigeria. We need Oshiomhole as a leader in this country. His wealth of wisdom and experience but he should really be the leader of all.”

The governor’s aide also frowned on  the belief that  Oshiomhole single-handedly made Obaseki  governor.

Akerele said, “The decision to make Obaseki  governor was a collective decision; it was not a one-man decision. It is erroneous for anybody to think that it was by one person. If Oshiomhole brought Obaseki and he didn’t scale through the scrutiny, he wouldn’t have sailed through.”

One thought on “Edo crisis: Meet This Condition And There Will Be Peace Talks -Obaseki”