Skip to content
You are here:Home|News|Buhari Mocks OBJ, Says Ex President Wasted $16b On Power Project

While receiving the Buhari Support Organization led by the Comptroller-General of the Nigerian Customs Service, Ahmeed Ali, president Muhammadu Buhari has indirectly mocked former  president Olusegun Obasanjo when he dropped a comment by saying a former president wasted $16b on power project without nothing to show for it.

President Buhari, while speaking during  the meeting, he said : “where is the power after a former president claimed to have spent $16 billion on the project”

Although president Buhari did not mention Obasanjo’s name, but it was very obvious he was referring to the former president because it was indeed the administration of Obasanjo that expended such amount of money on power project.
Meanwhile, the Nigerian house of Representatives in 2008 described the 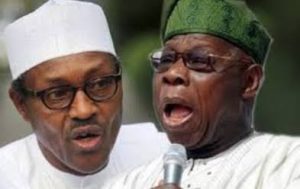 $16 billion spent on power project by Obasanjo’s government as colossal waste, blaming it on “poor budget planning and a lack of proper oversight by relevant bodies.”
Details later..