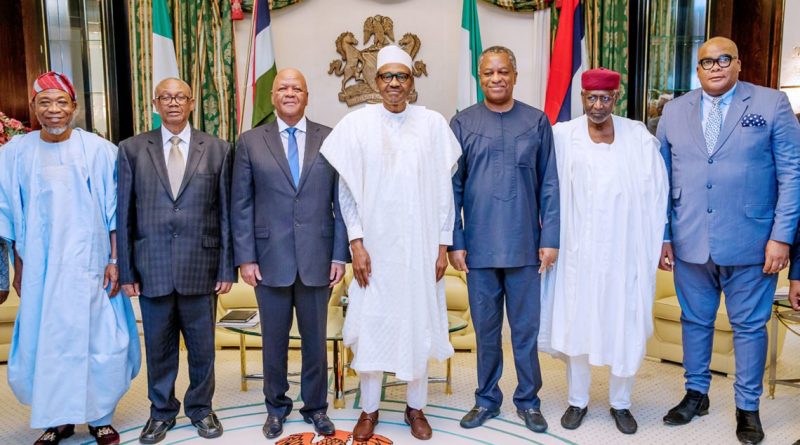 The President, who described the attacks and violence as “very unfortunate”, assured that the relationship between the two countries “will be solidified”.

They were accompanied by South Africa High Commissioner to Nigeria Bobby Monroe.

The President recalled that Nigeria made great contributions to the anti-apartheid struggles, which were not known to many South African youths.

At the meeting were the Minister of Foreign Affairs Goeffery Onyeama, and Nigeria High Commissioner to South Africa, Kabiru Bala.

Many Nigerians and other foreigners lost their lives and properties in the attacks, with many fleeing.

Radebe, who briefed State House correspondents, lamented the attacks and violence, saying that they did not represent the value system of South African people.

He disclosed that President Buhari will visit South Africa on October 3.

“Those incidents do not represent what we stand for as a constitutional democracy in South Africa.

“The President has apologized for these incidents, and he has also instructed law enforcement agencies to leave no stone unturned to ensure that all those involved must be brought to book so that the rule of law must prevail in South Africa.

“He also conveyed his fond memories of ensuring that both Nigeria and South Africa must continue to play a critical role in the rebuilding of Africa to attain the agenda 2063 – the Africa that we want.

“He has also recalled with very fond memories historical ties that exist between Nigeria and South Africa.

“During the dark days of apartheid, we always knew that the Nigerian people and their government always stood behind our leaders who were fighting against the obnoxious system of apartheid.

“Even, Nigerian feminists contributed financially to make sure that apartheid is ended. And though Nigeria is far from Southern Africa, it was regarded as a frontline state because of the principled stand that all leaders of Nigeria made to end the system of apartheid.”

Radebe expressed hope that both countries will explore further avenues for unity when President Buhari visits on October 3.

“I’m very happy that I came to convey his message to His Excellency, President Buhari, and leave with very good information that President Buhari has conveyed to us to take back to President Ramaphosa.”

On compensation, the envoy said there will be “detailed discussions” when the President visits.

He stressed: “I do understand that the issue of compensation, restitution is part of the agenda items in the draft that the Nigerian government has presented to South Africa.

“I think we should wait until 3rd October to see how that unfolds. But, I can indicate as a lawyer that the South African laws require that all registered companies must have public insurance in terms of things of this nature.”

Radebe said law enforcement agencies were working day and night to apprehend all those involved in the attacks.

“I’m told that more than 50 people have been arrested thus far. There is a security cluster in South Africa led by the Minister of Defence as well as the Minister of Police that is working around the clock to make sure that all those who are alleged to be involved in these incidents are brought to book.”

Radebe said the xenophobic attacks always occurred during “economic tough times” in South Africa, where the latest unemployment rate was around 29 percent.

He added: “It seems to us that some of these incidents occur in areas where there is poverty, unemployment and fight for scarce resources.

“Having said that, no amount of hunger or hardship justifies the looting of property and killing of people whether they are South Africans or foreigners. We regard that as an act of criminality.

“Obviously, there is an economic impact of these events that is why the President at his level deemed it necessary to send us as special envoys.

“So, it is the responsibility therefore not only of governments of Nigeria and South Africa but of ordinary citizens to play their part in ensuring that these incidents do not reoccur,” he said

Radebe said Nigerian Ambassador to South Africa was not recalled, but asked to return to provide “a comprehensive picture of events” that transpired in South Africa.

He quoted the President as saying: “Going back to historical antecedents, we made great sacrifices for South Africa to become a free state.

“I was a junior officer to Gen. Murtala Muhammad, and Gen. Olusegun Obasanjo. They were not operating in a democracy, but they got Nigerians to support them in the bid to see a free South Africa.

“Our leadership was quite committed to the cause. We made sacrifices, which younger people of today may not know. During my last visit to South Africa with the late President Robert Mugabe, it was very emotional, as Mugabe spoke about Nigeria’s contribution to free South Africa.”

The President thanked Ramaphosa, through the Special Envoy, “for coming to explain to us what happened in South Africa recently, leading to the killing and displacement of foreigners.”

President Buhari responded to the profuse apologies from the South African President, pledging that relationship between the two countries “will be solidified,” while describing the xenophobic attacks as “very unfortunate.”

The statement said Radebe apologised on Ramaphosa’s behalf for what he called “acts of criminality and violence” that recently occurred, adding that “such do not represent our value system, nor those of the larger number of South Africans.”

The Special Envoy disclosed that 10 people died during the attacks – two Zimbabweans and eight South Africans. He said there was no Nigerian casualty.

He said the visit of President Ramaphosa’s special envoys reaffirms the longstanding relations between South Africa and Nigeria.

Moroe quoted Ramaphosa as saying: “South Africa has been home to foreign nationals even before the end of apartheid.

“We are a hospitable and a peace-loving nation which has for many years fully integrated people from different countries within communities.”

Also on Monday, President Ramaphosa extended the deployment of troops in gang-infested communities in and around Cape Town.

His spokesperson, Khusela Diko, said the extension, which will last until March 31, was with immediate effect.

Members of the regular and reserve forces of the South African National Defense Force (SANDF) will undertake operations in cooperation with the Police, he said, adding that they will preserve law and order in the areas where gangs have spiralled out of control.

The Nigerian victims of the xenophobic attacks were airlifted home last Wednesday. Ogun State had the highest number of Nigerians evacuated from South Africa; the rest are from 16 other states.

She said letters of appeal have been sent to the states to solicit their interventions.

Dabiri-Erewa, at a briefing, said 30 children and a widow with four children were among the returnees.

She said Ogun had 30 returnees, followed by Imo State with 28.

Dabiri-Erewa said the widow is from Ondo, adding that the state promised to ensure the children are enrolled in school.

The NIDCOM chair said the states are expected to have their representatives on ground to receive their indigenes.

She said: “I am going to stressed one thing: those who returned are not criminals. In fact, they are very hardworking Nigerians and have lost everything they have ever worked for in South Africa.”

Dabiri-Erewa said the returnees who qualified will get soft loans from the Bank of Industry (BOI).

She said another set of 319 were expected to return today and their details will be forwarded to their states to ensure proper reintegration.

She added: “This is the time to show ourselves love and unity, it doesn’t matter what part of Nigeria you come from, we are one united Nigeria and the love and unity, the sense of togetherness was very prominent in this case, where we were being externally attacked.”

She said: “We must put legal language in the AfCFTA to ensure that all African presidents and Ministers of Trade know that they have a responsibility to protect people and businesses under the continental free trade agreement.

“The amendment can either be done directly by the African Union or each nation can raise the issue in their process of ratifying the agreement.

“Nigeria can actually take the role of pushing the investment protection agenda in its ratification of the AfCFTA.”