A few hours to the Ekiti State governorship election, it has been rumoured on the social media especially on Facebook that the Deputy Governorship candidate of the Social Democratic Party, SDP, Otunba Ladi Owolabi, has withdrawn from the race to pick the All Progressives Congress, APC, House of Representatives ticket for Ekiti Central Federal Constituency one.

The social media was flooded yesterday with the circulation of fresh postal of Hon. Owolabi for the House of Representatives under the ruling APC. An unverified Facebook account in the name of Hon. Owolabi screenshot by our correspondent also posted the yet-to-be-verified information.

Hon. Owolabi was said to have been prevailed upon by the APC presidential candidate, Senator Bola Tinubu to withdraw from the governorship race and go back to the green chamber of the National Assembly on the platform of the APC. It was also rumoured that the incumbent ticket holder, Mr Sola Fatoba, has been asked to step down for him.

Owolabi, who was a staunch member of the ruling APC before emerging as the running mate to Engr Segun Oni in the SDP, is a loyalist of Senator Dayo Adeyeye, who leads the South West Agenda for Asiwaju, (SWAGA), the APC presidential candidate ahead of the 2023 general election.

It was propaganda by APC to confuse electorate — SDP Chieftain

Speaking with Starnews Nigeria correspondent on Friday morning in a telephone interview, SDP’s chieftain, Mr Dennis Dairo, said the rumour was fabricated by the ruling APC to cause confusion and mislead the electorate.

“This is not true my brother. The story was peddled by the ruling APC to confuse and mislead the electorate ahead of tomorrow’s governorship election. We held our mega rally yesterday and his excellency, Otunba Ladi Owolabi, the incoming deputy governor of Ekiti State was with us.”

“SDP is the party to beat in Ekiti State. Engr Segun Oni is the talk of the town and that’s why they are trying so hard to confuse the electorate. APC is a party built on deceit and propaganda. That postal you see on Facebook is one of their tactics to misinform the unsuspecting public but it won’t work. It is a rumour and it can only be. Please disregard it”., he said.

See some of the postal below: 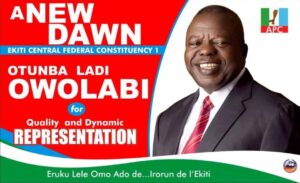 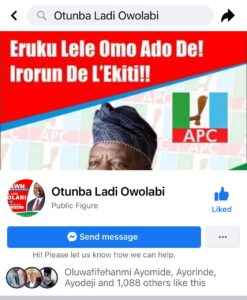