Skip to content
You are here:Home-News-Breaking: Akwa Ibom Youths Protest With Coffin Over Siege On State Assembly 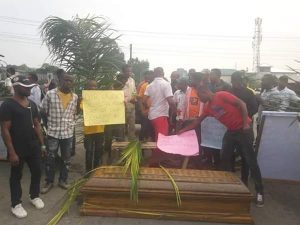 Akwa Ibom Youth protesting over the siege on the state assembly.

Their words as captured by one of the youth leaders, Snr. Comr. Daniel Essien, read: “we will resist every operations in the ExxonMobil field, if the Federal Government continues in fueling crisis in our peaceful State. We will stop every arm of WARSAW perpetrated in our peaceful State”, they stated. 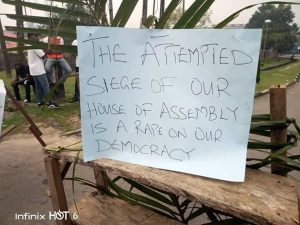 Yesterday, crisis erupted at the Akwa Ibom State House of Assembly after five members of the Assembly belonging to the Ruling All Progressives Congress (APC) earlier expelled, reconvened to purportedly initiate impeachment proceedings against Governor Udom Emmanuel, over the struggle for political supremacy in the State.