The American Government has again said it expects nothing less than credible and fair exercise in the July 14 governorship poll in Ekiti State, saying it will closely monitor events, before, during and after the poll.

This was stated in Ado-Ekiti by the Political/Economic Chief, United States Consulate, Lagos, Mr Osman Tat, during a courtesy visit to the State Governor, Chief Ayodele Fayose on Wednesday in Ado Ekiti.

In a statement by the Chief Press Secretary to the Governor, Mr Idowu Adelusi, on Thursday, the envoy was quoted as saying that the conduct of the poll should set a higher standard in the organisation of elections in the country.

“We are here for the monitoring of events leading to the conduct of the governorship election in the state. We are here to see the governor, to assess the situation of things and to dialogue with him on preparations for the election. America is interested in the election.

In his remarks, Fayose thanked the American Government for taking interest in the Ekiti election.

He told the envoy of plans by the All Progressives Congress-led Federal Government to use federal might to rig the election.

“They are planning to do this because they know that in a transparent and credible election, the APC cannot win in Ekiti State. We are popular and our party, the Peoples Democratic Party, is popular because of our performance in government and my brand of politics.

” In 2014, I defeated Dr Kayode Fayemi, even as he was the sitting governor then. The United States applauded the 2014 election and even recommended it as a benchmark for the 2015 general elections because it was transparent and devoid of violence and intimidation of voters. The letter written by the American Government on the election is still here for the records.

“Ekiti people will resist rigging. They will resist the Federal Government or the Independent National Electoral Commission rubbishing their votes. The people’s might is greater and potent more than the federal might,” he said.

Tat, who was accompanied by some American Embassy officials, made the visit as a follow up to an earlier one led by the American Ambassador to Nigeria, Mr Williams Stuart Symington, some months ago 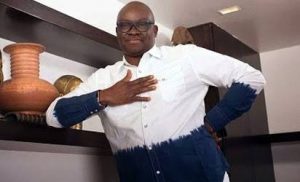